A year ago today, I found out I was pregnant. The experience of that moment is still crystal clear in my mind, and will undoubtedly be reserved as one of the happiest moments of my life. (Also in that category? Matt proposing to me… which also happened on December 2nd in 2006. December 2nd, you have set the bar high.) Shortly after I found out, I wrote down my memories of the day but I didn’t want to post them yet because we hadn’t told anyone – much less the interwebs – that we were pregnant. Here are my thoughts from one year ago today:

After the first two months, I went ahead and started buying the dollar store tests. I wasn't patient enough to make myself wait until after I had missed to test, and so I figured there was nothing wrong with testing earlier and more frequently if I was only pissing away a dollar each time. Literally.

We had been trying for a few months, but I didn't really have any anxiety about it yet so testing ahead of when I should was more just out of impatience and curiosity. I'd always feel a little disappointed when the test was negative, but I'd console myself with a glass of wine and thoughts of some trips and travels we could do in early residency with the extra time (and income!) we'd finally have on our hands.

It was the first Saturday morning in December and I was getting ready to go dance at the Mistletoe Race ceremony with my dance trance group. On a whim, I took a dollar store test - even though according to my phone app, it was way too early. A week, early in fact. Eh, why not. I left the test on the bathroom counter and went to make an English muffin.

I came back in the bathroom to do my make-up and did a double take. The second line was very faint, but it was unmistakably there as it never had been before. My heart racing a little bit, I tore into my precious stash of real tests. After testing, I forced myself to set my cell phone for the allotted time and walk out of the room.

Longest 2 minutes EVER. My hands were shaking as the clock counted down. 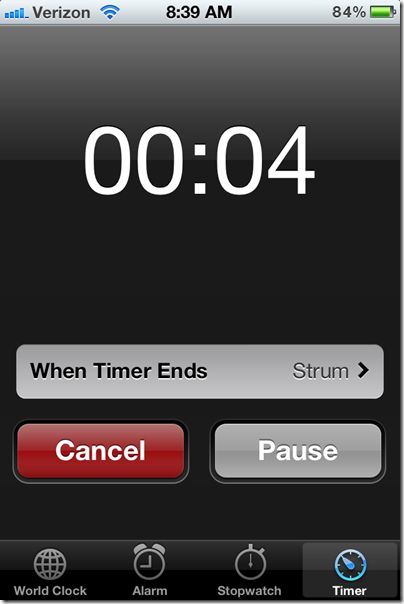 I walked back into the bathroom as the buzzer beeped and there it was: a plus sign. A plus sign. I started laughing. I went and sat on the couch. Matt was working until 3 that day, and though I've paged him for less significant moments before ("where's the remote?!") I didn't want to break the news over the phone. I sat there in shock. I told Buddy the news. I cried. I laughed again.

I got dressed and drove over the Y. In my head, the whole time I was dancing I just kept thinking to myself "I'm pregnant. I'm really pregnant. HOLY CRAP, I'm pregnant." I wanted to burst and tell SOMEONE, anyone the news... but decided I should probably reserve the first-to-hear-the-news for my husband, so I refrained.

I got home around noon and waited the 3 agonizing hours for Matt to get home. I thought of all the different ways I could tell him and I finally landed upon wrapping the test up as a Christmas present and putting it under the tree. I shoved it into his hands the moment he walked in the door. "An early gift for you!" I said. He looked at me quizzically, then tore the packaging open - and looked at me even MORE quizzically, before the hugging and "holy crap" started in earnest on his end.

That night we went to Lovefeast together - a tradition we've done every year since we've been married. It's one of my favorite Christmas traditions, and it always instills in me such a feeling of peace and contentment. This year was no exception but of course my mind was somewhere else... quickly fast forwarding to how different our next Christmas would be. (Not likely bringing a 4 month old into a quiet, candle-lit sanctuary that's for sure!) I don't know if I will ever forget the markings of that day, but I wanted to write it down and capture it just in case the details grow fuzzier over time. I want to remember the feeling of anticipation as the timer counted down, the quiet shock and excitement at seeing the positive result, the dichotomy of going about my normal day among friends while knowing that life had already started to change and that wonderful moment standing in our kitchen realizing we had just started the adventure of becoming a family of three.

Oh my gosh, it's so lovely that you wrote down your thoughts of that day! Reading your account of the experience brings back memories-- especially the shaky hands!

Oh, I love stories like this. And even if you think you would never forget it, you might (or confuse it with when you found out about future kids :) ) so it's awesome you recorded it.

Oh, I will always remember this day! How could we ever forget?? The first (and only) DTWS public performance. What a morning to find out such amazing news. And now I know why you wanted to treat yourself to Chick-fil-A for a breakfast treat...babies love a good chicken biscuit!