Weight: I actually don’t have a height & weight for him this month, so I guess it will be a surprise next month at his 12 month. He’s wearing 12 mo onesies and shirts, 9 month shorts (for the length – still a little shrimp I guess) and a few 18 mo items like shortalls.

Eats: A solid 3 bottles a day, although for the first time in his LIFE he is leaving some formula left in the bottle. I’ve started making his mid-day and night time bottles at 7 oz and he’s been fine with that. (No crying at the end of the bottle anymore.) He eats so many real food now and it feels like all of a sudden we’ve gone from baby food to “real food” – although Cheerios still elicit the greatest joy. Having him be able to feed himself has been life changing – now when we sit down for a meal, I can actually eat at the same time!

Sleep: He’s taking two naps – one mid-morning and one mid-afternoon. They usually last about an hour to hour-fifteen each, although when we were at the beach at the end of the month some of them ticked up around 2 hours. I’m not sure if it was the pitch black room he was sleeping in (aka the closet) or playing hard on the beach, but I wish I could create the same thing at home! A well-rested Bo is a happy Bo. He sleeps from about 7:30-6:30 at night and that’s been pretty consistent all month.

Milestones: He was rolling in earnest throughout most of the month, and getting up on all 4 to just rock back and forth. Then about half way through the month, right before we left for the beach, he took off crawling! He’s still pretty slow so I can keep up with him, but I officially have a mobile baby now. He also absolutely loves being in his walker and cruises around at breakneck speed in that – often pointed straight towards poor Buddy. He blows kisses complete with a “Mu-waaaah” and waves bye-bye with a “buh-buh.” He’ll mimic back things we say to him like thank you and night night, and has started making some animal noises on Peek-a-Boo barn. “Oink oink” is his specialty. He’s had two teeth come in up top – but not the two middle ones. One middle and one side, so that I’ve taken to calling him snaggletooth. He also finally got the hang of using a sippy cup with a straw… just in time for me to start working on weaning the bottle. (Sigh.)

Likes: Cheerios, Greek yogurt, chicken, grilled cheese, Buddy, shrieking, FaceTime, using straws, Peek-A-Boo barn, running around in his walker, his Daddy, throwing all the stacking cups on the floor and then running over them with the walker, the beach, videos of himself

Dislikes: touching slimy foods, waiting for breakfast, missing a nap, being cooped up on an airplane for too long, teeth, being told “no,” short sleeves during nap time

This month was one adventure after another. Bo and I flew up to Rochester at the beginning of the month for a high school friend’s wedding shower and our first visit home. I wouldn’t go so far as to say flying with a 10 month old is enjoyable, but it was a heck of a lot better than the first time. (He’s able to be awake longer and entertained easier and they were shorter flights.) We had a wonderful time in Rochester. We got to have two long, long, long awaited playdates. One with my friend Kristen and her little boy, Ryan. Kristen and I had a baby bump date last May when I was home for my baby shower, and had been waiting for a chance for the two guys to meet. We also had a playdate with Maggie and Christy – Christy is my sister’s best friend from junior high, so she practically feels like a little sister to me too. We were pregnant together and had a due date just two dates apart – but our babies are 3.5 weeks apart. We’ve spent the first year of their life raising the two of them together over weekly text messages so it was great to finally get to meet each other’s babies and let them play!

Back at home, Bo and I had a terrifying experience where we were caught in my car in a storm with over 100 mph winds. We took shelter in a church parking lot (where I still feel indebted to a kind stranger who pulled up next to me to tell me to point my car into the window ((in retrospect: obvious)) and then motioned for me to put my head down right before tree branches started snapping all around us. After the storm, which hit our neighborhood the worst in our whole city, we couldn’t get back home and spent the rest of the evening taking shelter at the Glenn’s, then returned to a house with no power, then finally headed down to Matt’s parents’ house to spend the rest of the weekend.

After all THAT, we headed down to the beach for 10 days where we got a lovely dose of sun, sand, oceans and grandparents. Bo loved scooping up the sand and playing with a shovel, and was tickled to sit at the water’s edge and let the waves lap over his little legs. In fact, he was pretty pissed off when I took it upon myself to go for a swim without taking him with me!

This month definitely put my routine loving baby (and his mama) to the test, but Bo rolled with it pretty well. By the end of the beach week, he was starting to show signs of unraveling at the edges – for example, throwing foods he normally gobbles right up off his tray. But all in all, he was a trooper though I think I heard him breathe an audible sigh of relief when I laid him down in his own crib our first night home.

Everyone who looks at him now says “He’s turning into such a little boy!” and I feel like it’s happening right before my own eyes, too. In many ways, he’s still so much a little baby… and I find myself really savoring those little moments he’ll snuggle into my arms or reach up and pat my cheek while he’s drinking his bottle. Because as soon as he’s done, he’s wiggling out of my arms, on to the ground and taking off after something exciting. Ready to charge into toddlerhood, I guess!

He was not in the mood to do pictures today… and he definitely didn’t want to sit still. But, I feel like these are a pretty good representation of many days of this month! 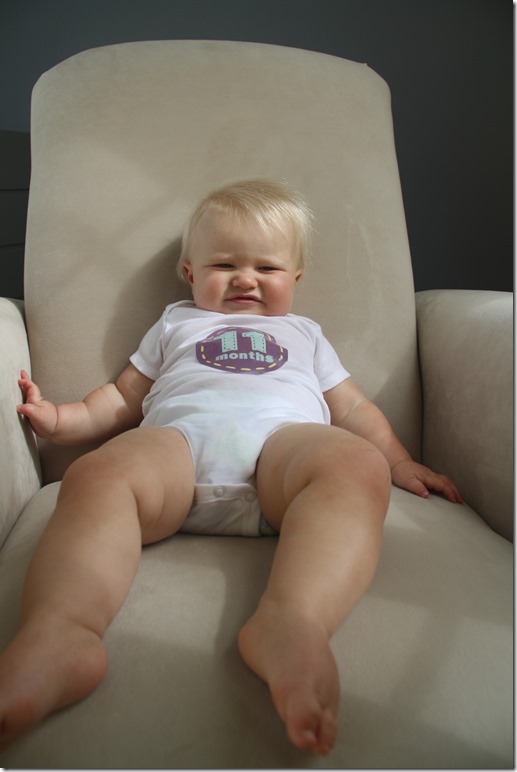 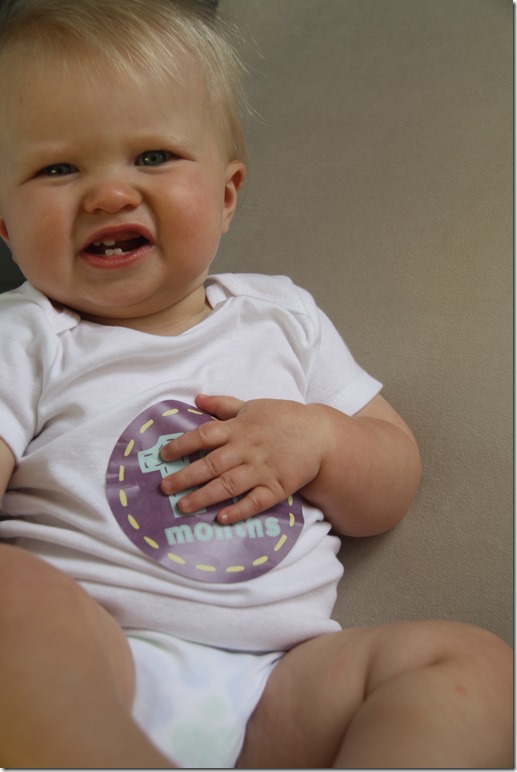 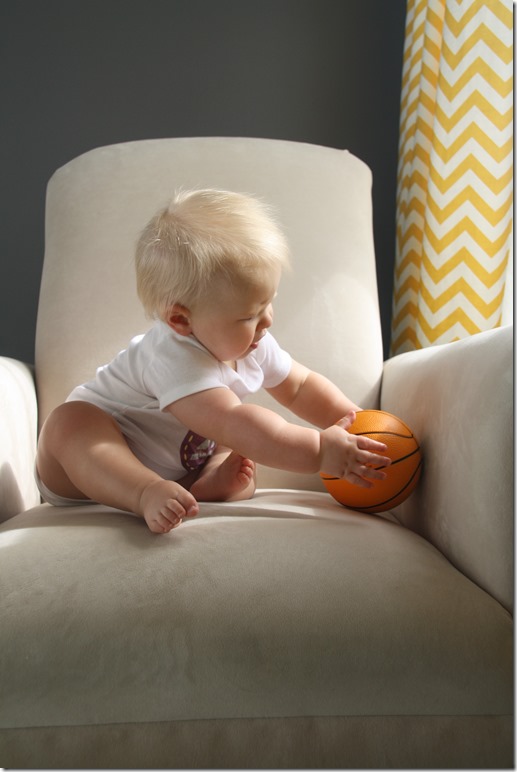 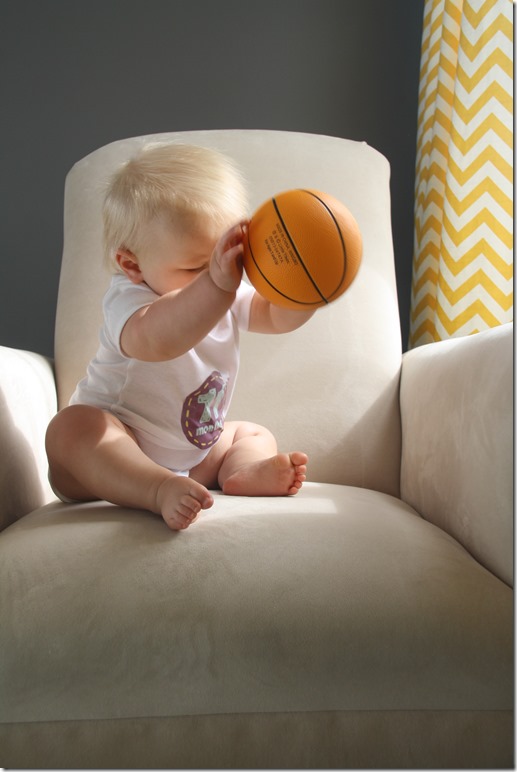 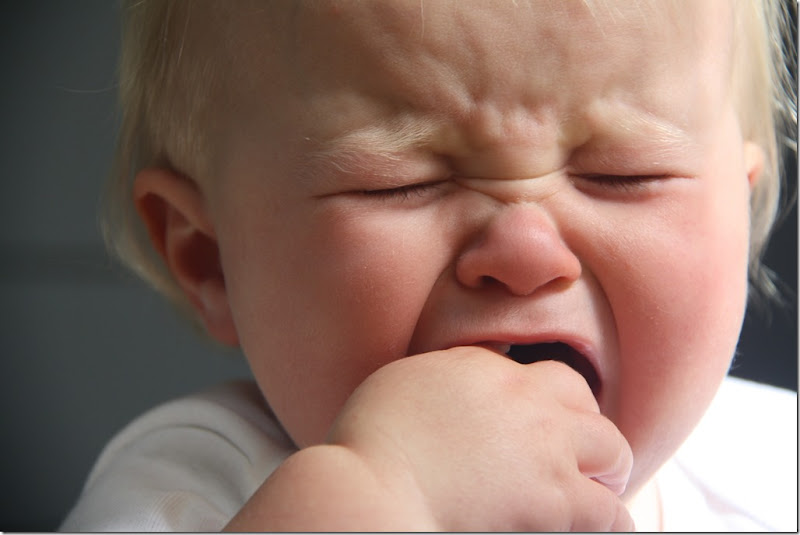 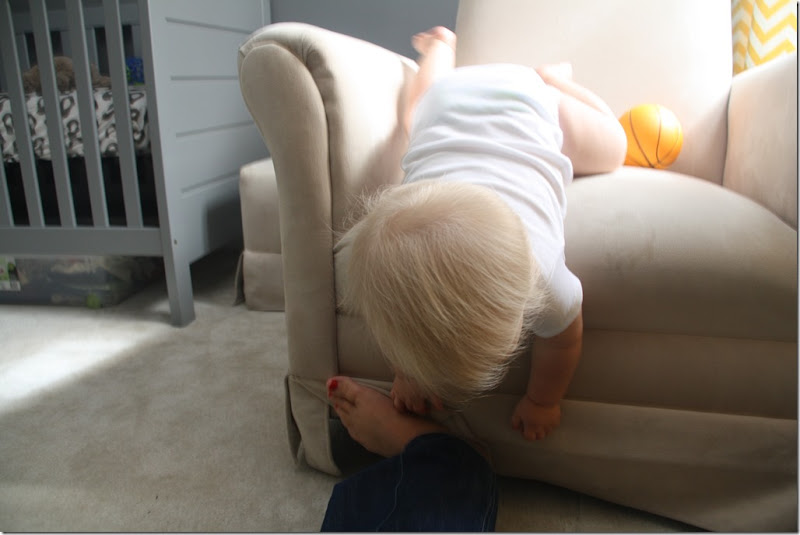 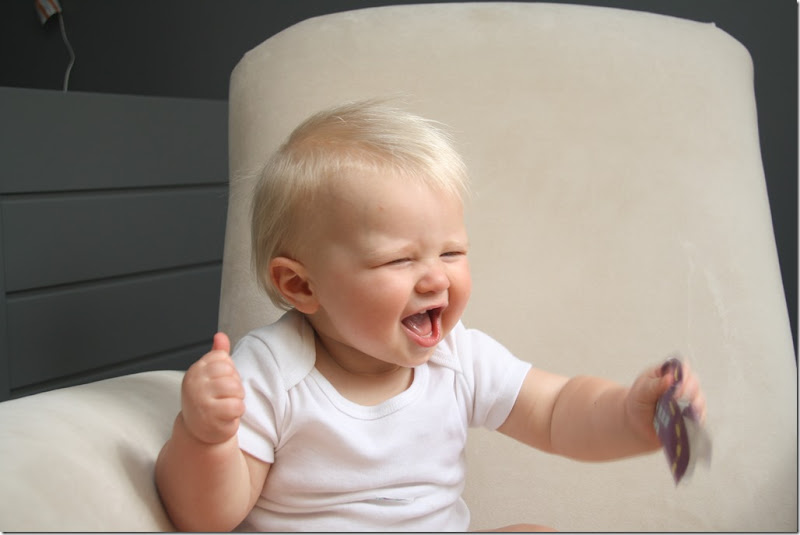 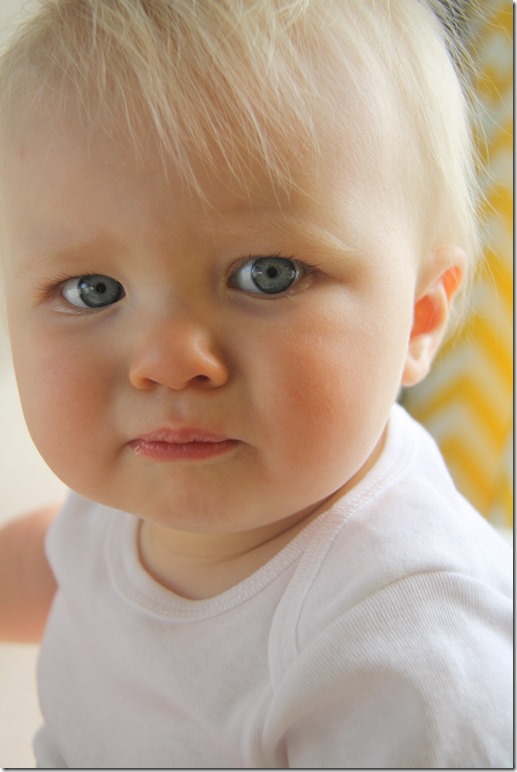 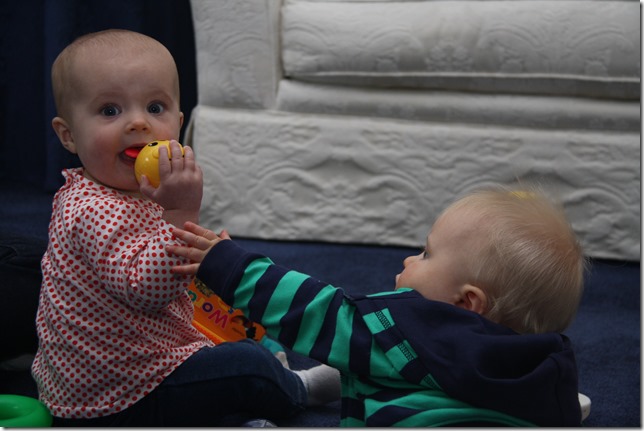 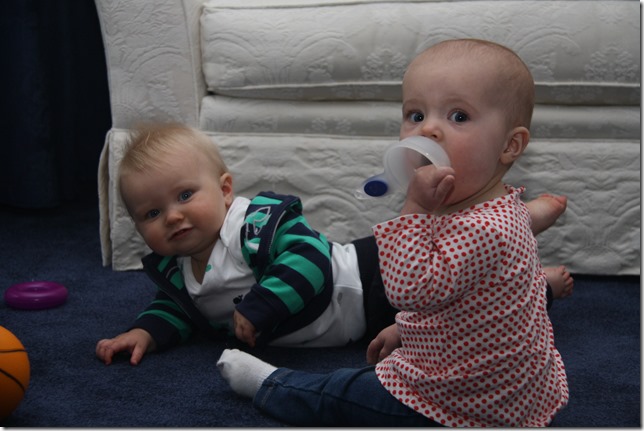 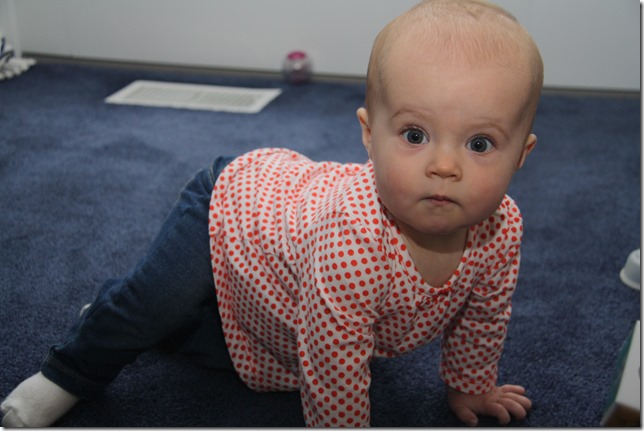 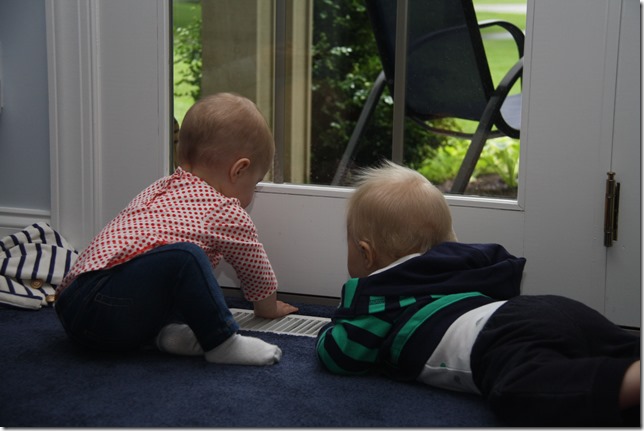 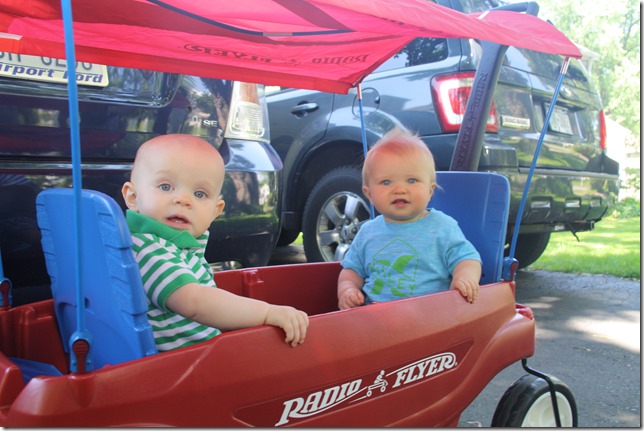 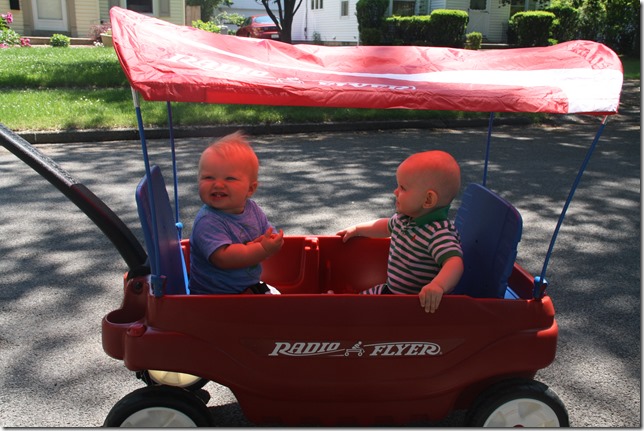 I am learning a few things about my almost-toddler-boy:

3. He really likes when the two are combined.

(And I am applying this new rule: if it entertains him for longer than it will take me to clean it up, then the mess is worth making. Have at it, kiddo.) 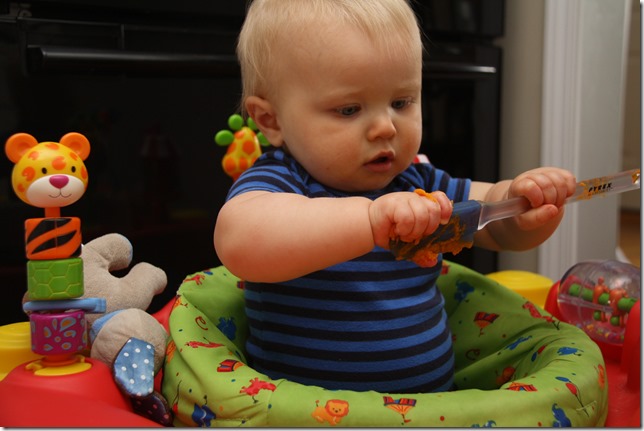 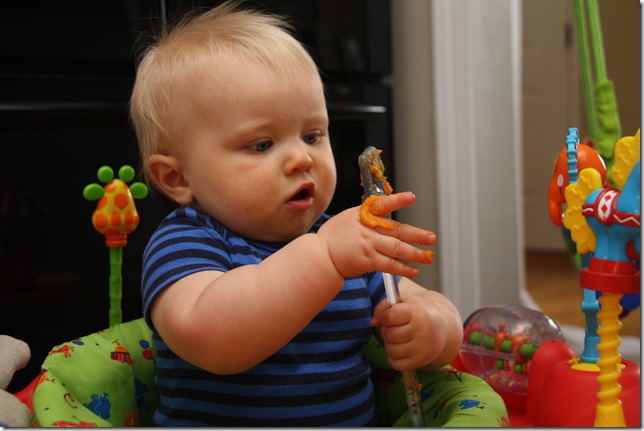 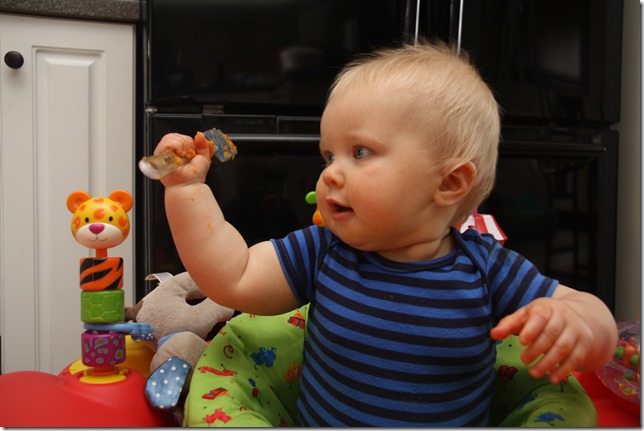 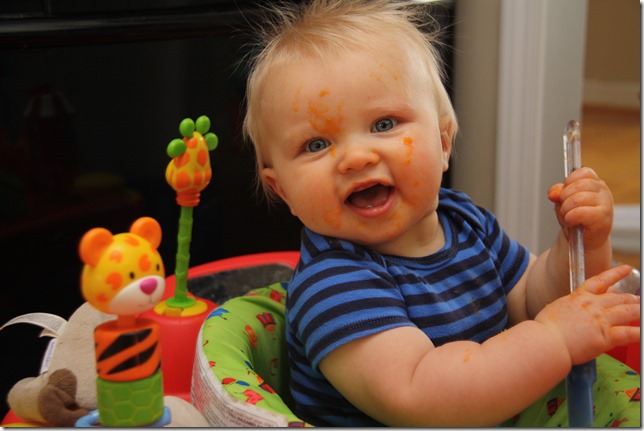 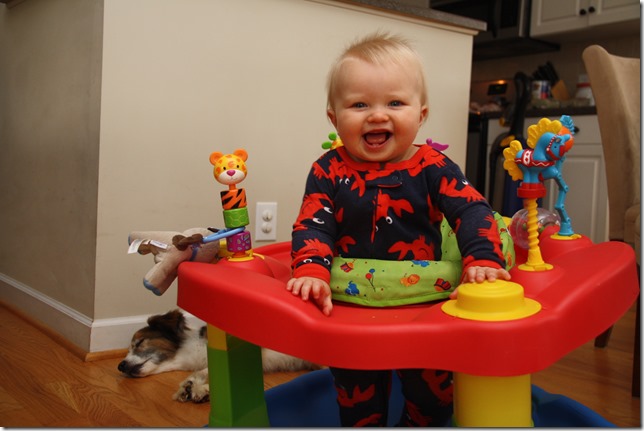 This child is an absolute ham. I pointed the camera at him and said “Bo, say cheese!” and this is what I get.

Anytime we are out in public, he instantly locks eyes with someone and either laughs and giggles until they smile back or he will do the “smile, bury his face in my shoulder, quickly look back and smile again” routine. He is not the least bit shy. I just can’t even imagine what this personality trait will look like as he gets older, because it is such the opposite of how his shy, introverted mama was growing up. He makes Matt and I laugh every day at one antic or another of his. He really is just such a happy little guy. It’s basically impossible to feel anything but joy when he’s around. Even on my most bone-tired days when the coffee isn’t pumping out of the Keurig fast enough, walking into his room and seeing that cheesy grin on his face as he sits up in his crib and claps with delight at my presence is basically the greatest gift I could imagine. I love you, sweet cheesy ham biscuit of mine!