Stats: We haven’t had his appointment yet to get a height and weight but the unofficial weight by my scale is 25 lbs. Clothing size hasn’t changed a lot– he’s in 18 month tops, 12 month pants and 12-18 month pajamas.

Eats: EVERYTHING. I call him my toddler garbage disposal. I’m crossing my fingers that this appetite remains through the toddler years, because I know full well that they can change their minds on a dime and suddenly, favorite foods become repulsive. But as of right now, there isn’t a thing this kid won’t eat. His favorites are: corn, carrots, butternut squash, bananas, pears, strawberries, blueberries, turkey meatballs, grilled chicken, salmon, roasted chickpeas, grilled cheese, mac n cheese, peanut butter, waffles. (That wasn’t a particularly narrow list, I guess.)

Sleeps: He's on a pretty regular 7pm-7am nighttime schedule. He no longer pulls on his sleeve to fall asleep, that’s been replaced by his new best bud “Puppy.” We hear him on his monitor going “puppy puppy puppy” and rolling back and forth with him. He also sleeps with Bunny (called “ee ee”) and a sock monkey lovey (also called “ee ee.”) He was doing 2 naps a day until right around 14 months, then we went through a rough 2 weeks of “2 naps too much, one nap too little” and then all of a sudden, I found myself with a one-nap baby. It’s usually about an hour and a half, although on a random lucky day I’ll get 2 hours. Everything has been pretty much smooth sailing in this department until daylight savings came along. We won’t talk about that though.

Milestones: So. Much. Talking. It amazes me how many words he picks up on and has reminded me it’s time to clean up my language. Right around his first birthday he was doing a lot of animal noises and saying “mommy” and “daddy.” In the months since then, his language has exploded. Which I guess, balances out the fact that his gross motor skills have always been a little bit late to the game. (Note: not complaining.) Shortly after his birthday, he started pulling up and by 14 months he had gotten the hang of cruising. The last month or so, he’s been doing wind sprints around the house with his push-walker (or a cooler, if we’re out on the back deck…  Annnnnd, then just a few days ago, he did finally take his first few not-so-cautious steps. Over the last week, he’s been taking more and more of them although he won’t take off from furniture by himself – he only goes when he’s holding on to our hands and can let go from there. (He also hasn’t figured out how to go from a sit to a stand or vice versa yet –  we’re doing things a little bit out of order.) In the last three months, he’s also mastered stair climbing – seriously, seriously fast – and opening cabinet doors and toilet lids. So, baby proofing.

Milestones, Part 2: I wrote this right around his 15 month birthday but didn’t get around to posting it until 2 weeks later. Within the span of 2 days, he went from: walking from person to person to pulling up on furniture and walking away to pretty much sprinting around our house. (All on his tiptoes. I go back and forth between being concerned about this and assuming he’ll grow out of it.)

Things I love right now: He makes “wee oo wee oo” noises when he sees an ambulance or fire truck in his books but usually opens and closes his eyes while he makes the noise. He loves to FaceTime with anyone but immediately starts asking for kitties (“mrow? mrow? mrow?”) because my mom usually flips the camera around to her kitties – so it doesn’t matter if you actually have kitties or not, he will ask. Anytime he hears a door open in our house, he says “Daddy?” He rolls his tongue (like a spanish R) whenever he is playing with cars. He loves to read and will pull every book off his bookshelf looking for specific ones. He mimes “wash your hair,” “brush your teeth”, and “clean your ears.” He holds everything – phones, remotes, and the video monitor – up to the side of his head and says “hello?” If he hears me talking on the phone, when I say, “okay I’ll talk to you later” he shouts “bye bye!” He LOVES to go anywhere – it doesn’t matter where we’re going, if I say “going bye bye” he gets over the top excited. He’ll make faces on demand – surprise, grumpy, sleepy and happy (or “cheese” face). Grumpy is, of course, the best.

In some ways, he’s become so much a little boy – when he sits reading a book with his legs crossed, I find myself staring in surprise at this little child who has appeared before me. But at other times, I’m reminded that we’re still closer to babyhood than big kidhood and I don’t have to feel too hurried. (Unfortunately, those are usually the moments where he’s having a meltdown over… oh I dunno, the fact that I put pears on his tray when he saw a banana on the counter and wanted that.) It’s rare that he holds still for a minute these days, so I cherish the moments when I’m putting him down to bed and he’s sleepy enough to rest his head on my shoulder for a minute – feeling the heft of his small body leaned into mine and remembering how he once fit into the crook of my arm.

I have people tell me all the time when they ask how old he is “oh this is the most fun age.” I can see why. I feel like I never stop laughing when I’m watching this kid in action. Except, of course, when I’m watching him lift up the toilet lid and throw something in. (That happened in slow motion in case you’re wondering why I couldn’t intervene. Luckily, it wasn’t a phone.) Watching him make connections about the world and discover words for things or be able to communicate his needs with me is incredible. I hope I never get over the wonder of watching a child learn about the world.

Happy 15 months, Bowie Boy! We couldn’t love you more if we tried. 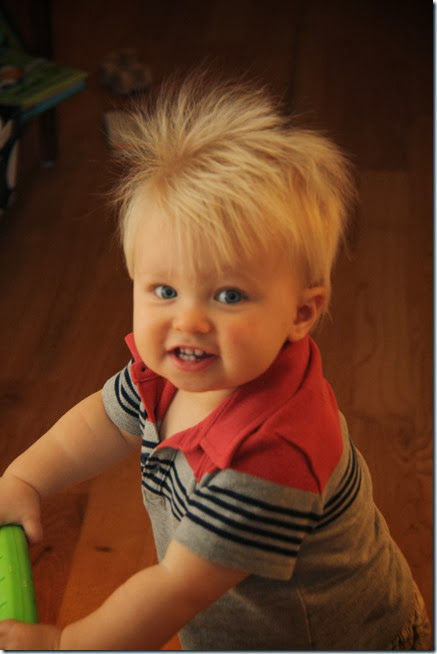 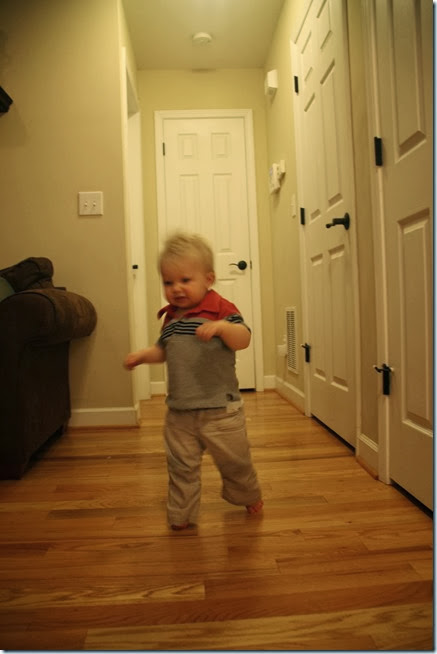 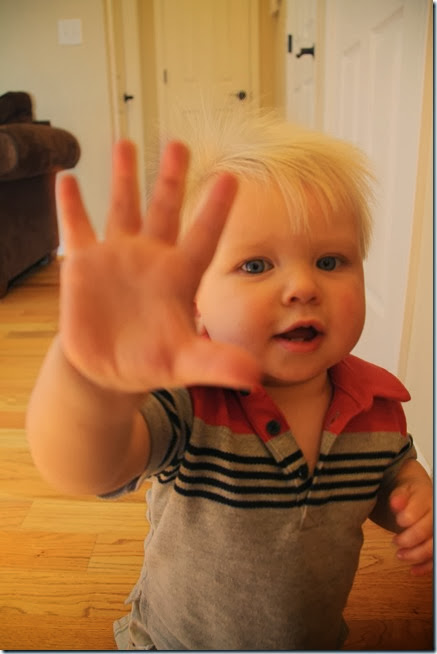 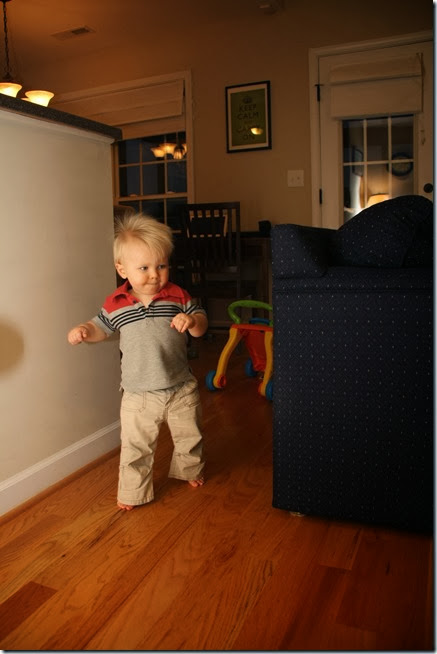 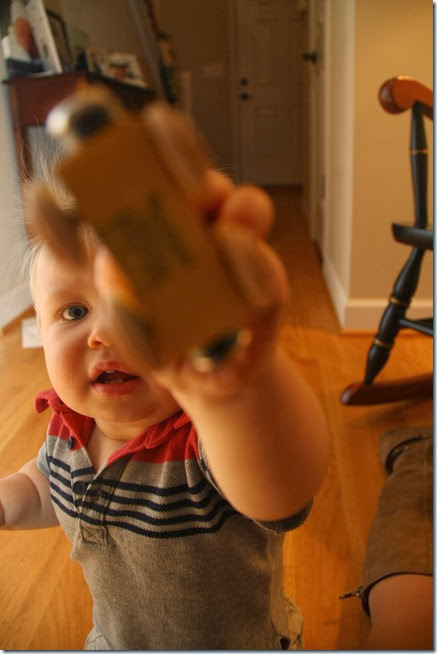 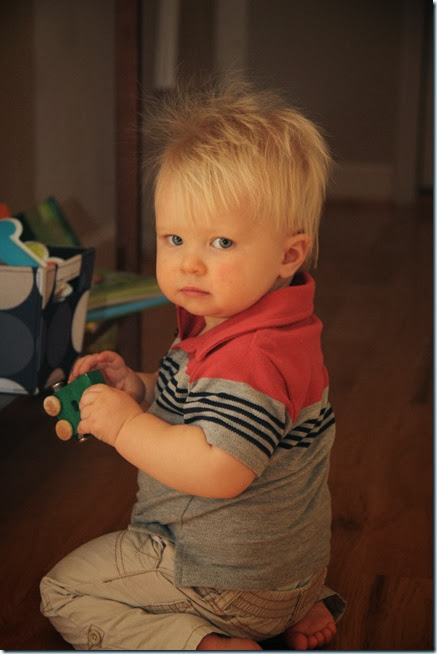