Today is my good friend Anne’s victory lap birthday. We celebrated quite early in the morning with hazelnut lattes and scones/cinnamon rolls at Camino. I didn’t take a picture of the delicious food or the birthday girl, just my baby in a bear hat sitting in their corner booth with pillows made of fabric eerily similar to Bo’s bear hat. 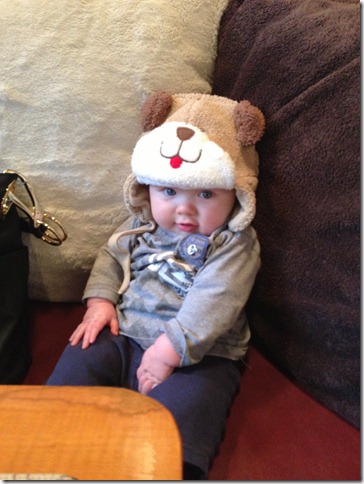 Because it’s just four days before Christmas, Anne’s birthday always feels like the official kick-off to the holidays for me. (Did you know that, Anne?) After our coffee date and a quick car nap, Bo and I headed over to Fresh Market for some last minute holiday cooking supplies.

Note to self: when you have to park in a completely different parking lot and walk over, you know it’s going to be bad inside the store.

It was. But, everyone was in a good pre-holiday mood and I just needed a few things so the trip wasn’t too painful. Plus, I had a baby in a bear hat strapped to me. Who wouldn’t smile at that? Even the guy who saw me knock over a display of pistachios with my giant mom-purse gave me a “oh no big deal” smile when I sheepishly turned back to see the destruction in my path.

Cue another gratuitous picture of my baby in a bear hat. (Obsessed.) 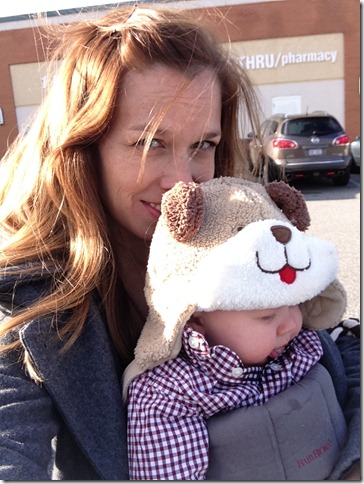 It was windy out. I swear I brushed my hair. (Okay, I can’t really swear to that.)

Once we got home, I had a few last night minute preparations to finish up. Two years ago I made a bunch of rubs for my Dad for grilling and they were a huge hit. I decided to repeat it this year for my sister-in-law’s boyfriend who is an awesome cook. They are super easy to make and always well received. Last year, I wrote with sharpie on the bottom of the jars for my Dad and so refilling them as they run out has been a matter of trying to discern “is that thyme or cumin?” from sniffing and tasting. Fail, Meghan. Fail. This year I actually made cute labels for them that described what they were and suggested what to use them on. I was pleased with this round of them. 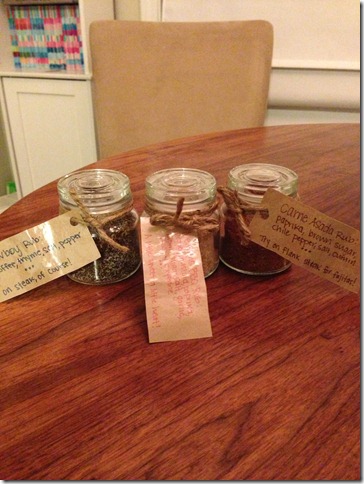 Then, on a whim while Bo was napping, I decided to whip up some cupcakes and take them around to some of our friends’ house to spread some holiday cheer. I blame my friend Lindsay for this. She had just written a blog post about those moments when you think of something really nice to do for someone, and you get too busy or lazy to follow through on it. I do that all. the. time. (Pretty much anytime a friend has had a baby: “I should make dinner!” and then I don’t. Ugh. I will now ALWAYS follow through on that.) Anyways, after reading her post, I decided I wanted to try and have a little more follow through on my “nice things for others” thoughts that pop into my head. Wouldn’t you know it, a day later, there was one of those thoughts. Darn you, universe.

The thing is, even though it took up all of naptime to make the cupcakes, frost them and put them in little packages, the whole time I was doing it I kept thinking how delighted I would be to find cupcakes on my front porch and it kept me going. Dropping them off at people’s houses – leaving them on the front porch or hanging on a doorknob – give me a little thrill. Maybe nice people who follow through on their ideas are on to something after all. Hmm… 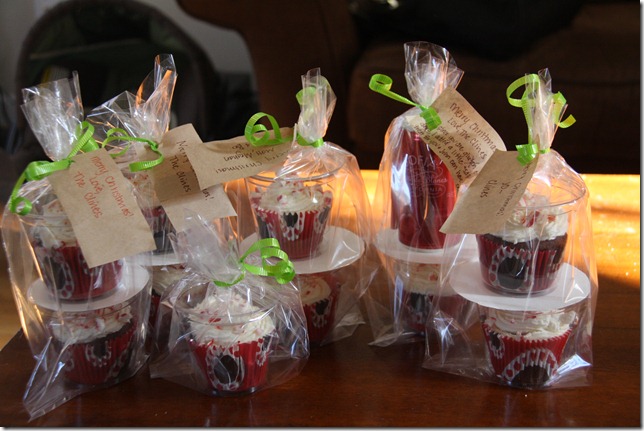 (Although I did find out later that I should have paid better attention to one of my friends’ travel plans and their cupcakes sat on their porch for a week. Oops.) 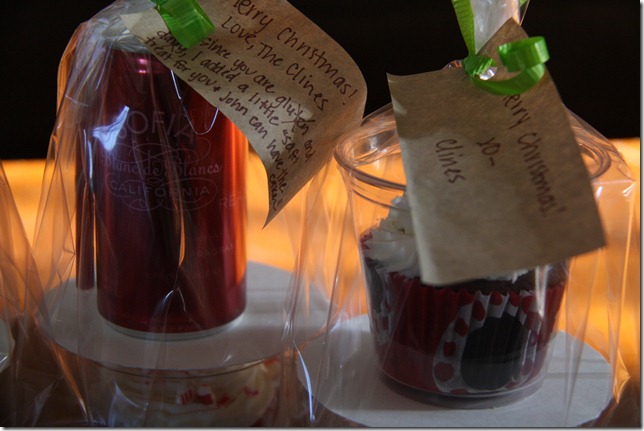 (I even patted myself on the back for remembering to include an alternative for a gluten-free and dairy-free friend.)

(And let’s be honest, wouldn’t you rather have a can of champagne that a cupcake dropped off on your front porch?)

After playing elf, Bo and I came home to relax before the holiday hoopla started. Our plan for the coming week: my parents arrive Saturday, my brother flies in Sunday. Head down to Matt’s parents on Monday, stay through Tuesday. Head back Tuesday night, sister and brother-in-law arrive Wednesday and do Christmas. Sis and BIL leave Thursday, brother leaves Friday, parents leave Saturday. Whew.

Sigh of relief on Sunday.

(I don’t know why I’m using so many asides in this blog.)

I’m excited for Bo’s for Christmas, even though he won’t remember it or really know what’s going on. It’s just an important first! But it’s sort of a weird feeling to not have an actual holiday break. I mean, I’d much rather be at home and not have a break than be at work to have a break… but basically the holidays were just going to be my normal routine with more people and food around. Fortunately, I like all the people we were going to be around and I certainly like all the food that was going to be around. So, with that Bo and I enjoyed one last quiet day together before his first Christmas officially kicked off. 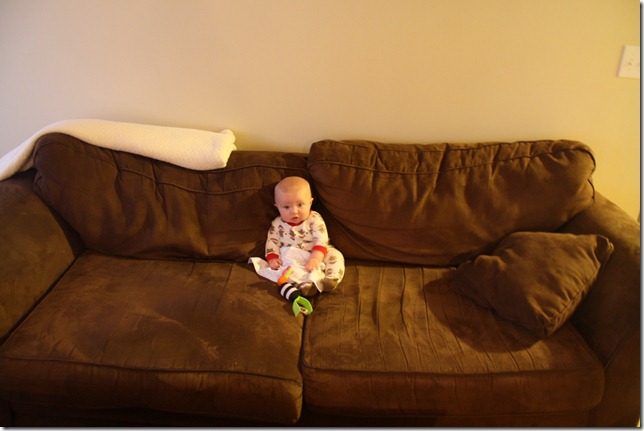 I was so excited to pull up to our house and see a gift waiting on our doorstep. Then I was a little disappointed to find out that they probably shouldn't be consumed. Nice to know nobody was snooping around snagging delicious cupcakes while we were gone.