Running with the BOB and Putting Race Plans on Hold

I’ve been eagerly awaiting the moment when Bo was big enough to sit up in the jog stroller. This weekend brought a surprise warm streak – 60 degree days in December – so Matt suggested we test it out. When I first got the BOB, I read on the website that they recommended you wait until they are 7-8 months old. I was shocked you’d have to wait that long and then super disappointed that it would be so long before I’d be out running again. (Of course I could run without him, but I knew I’d be much more likely to find the time to exercise if I wasn’t also having to work around Matt’s schedule too.) Then I read on a number of running forums that people were using them much sooner, basically as soon as their babies had good neck control. Bo’s always had surprisingly good neck control and by now, he’s sitting up (supported) so we figured we were good for a test run. (Literally.)

I was so glad Matt went with me on my first run. Pushing that stroller with a 16 pound baby in it is no joke – especially when you haven’t run in about 25 weeks. Although, in all fairness to myself my last run was at 28 weeks so I was lugging an extra 25-ish pounds at that point too. Anyways! The point is, I’m out of shape. And out of shape plus pushing a heavy contraption with a child inside makes for a seriously tough workout. (Anytime I see someone pushing a double BOB now I want to stop my car, hop out and high five them. Whoa, momma.) But the good news was that even though I felt like my heart was going to leapfrog out of my throat, Bo was extremely content and comfortable in his little seat watching the world go by. 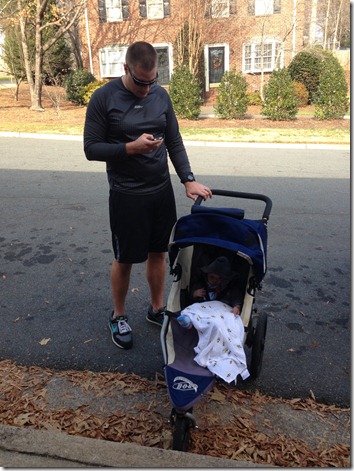 Since then, we’ve gone on a number of short runs together and I’ve actually found it’s a great activity for dreaded and inevitable 5pm witching hour. Also known as whine/wine hour in this house. Even if he’s crying a little while I’m strapping him in the seat, as soon as the wheels start turning he’s quiet and content. Never would have expected “stop baby from crying” would top my list of motivational reasons to exercise, but there you have it. 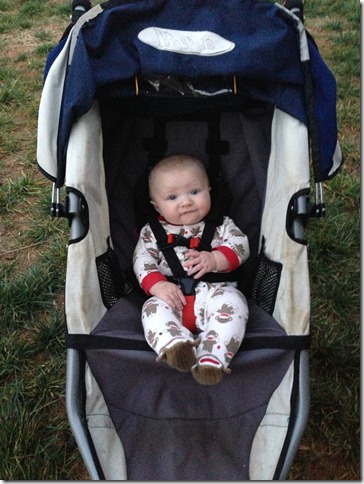 Of course, as soon as I got a few runs under my belt I started scheming. Could I run a 5k with a stroller? A 10k? Could I train for a half with a stroller and then go run it without and actually clock in a time that wouldn’t be confused for an almost walking pace? I’ve got the race bug again and I’ve got it bad. Problem is, that lovely warm streak we had the first two weeks in December has disappeared. I don’t like running in cold weather – I’m a big giant wuss – but I also don’t think I can bundle Bo up and go for a dash with the wind whipping his little cheeks. The BOB is pretty tricked out, but they forgot to install seat heaters.

So for now, I’m putting my race-again-someday dreams on temporary pause and sticking to the elliptical in our bonus room as my preferred method of burning off the last of the baby weight. I can still hang out with my little guy without worrying that those giant cheeks of his will be rosy from windburn. 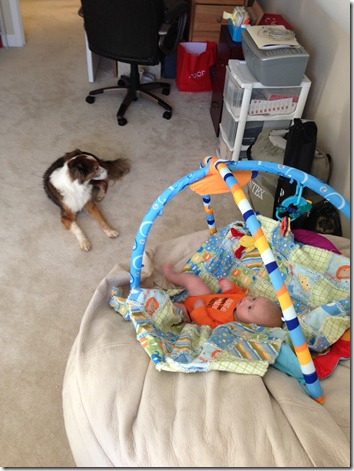 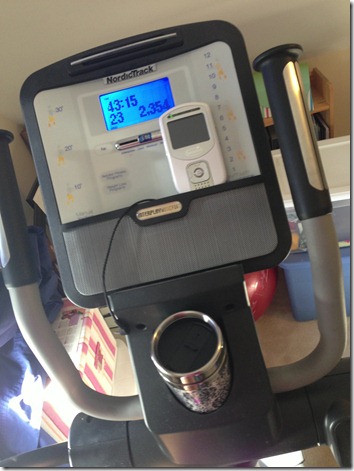 But watch out… come spring, I’m going to be tearing up the sidewalks with my running buddy. Let’s just hope he doesn’t double his body weight again over the next four months.

RUNNING WITH A RUNNER IS DEATH!!! I have already come to I know what you mean about stopping and giving moms high fives! lol One good trick for cold weather is putting a blanket up in front of his face (hanging from the top of his stroller). It usually puts H to sleep. And the runner is definitely a cry stopper. (Love that) I would so go walking after H was born just to keep him from crying! Good luck with the running/races!! Maybe we can do one together this coming spring! :)