Stats: 30.5 lbs, 34 inches! Growth spurt! He actually jumped from the 20th percentile growth curve to the 50th. Holla for average height! He’s wearing 2T on top and 18 months on the bottom.

Eats: Still almost anything, although some occasional bouts of pickiness have shown up. Yesterday I asked him what he wanted for breakfast and he said “Hmmm…how bout…. Chicka lay?” (Chick-Fil-A.) Nice try, buddy! His favorites are yogurt (obsessed), grapes, peanut butter sandwiches, strawberries, turkey meatballs, corn, chicken and ketchup, pita and hummus, watermelon and blackberries. He will not eat cheese. I don’t get it.

Milestones: Runs and climbs, runs and climbs. He’s a hundred miles an hour. He’s AMAZING at kicking a soccer ball - he can chase it all around the yard. He’s also got a pretty decent throwing arm (and occasionally remembers to “throw to hands” instead of faces. Eek.) He can do the stairs by himself now but he still prefers to hold a hand. He has a million words. Seriously.  He speaks in sentences - “I need help,” “I want a snack,” “I not sleepy.” He sings songs - I’ll catch him singing Twinkle Twinkle or Wheels on the Bus to himself in the car sometimes. He requests his favorite songs - Sweetheart (Ho Hey), Hot Dog and Bamboleo (?!) are top three right now. He tells stories about things that happened in the past and has an amazing memory.  He repeats things I say constantly, like “oh my goodness!” and “how nice!” My favorite is when he’s doing something “naughty” he’ll go “You s’posed to do dat?” to himself. He’s started doing a lot of pretend play - pretending to talk on the phone, holding up fake food and making “chewing” sounds, etc.

Loves: Trucks, trucks, trucks. Anything with wheels. Particularly construction vehicles. Going to the playground, the Y and the pool. Playing on the porch and in the grass. Zoey and Eli. Reading books - favorites right now are a Curious George book, Happy Baby, the Pookie series, Is Your Mama a Llama and 12 Little Race Cars (memorized this one). Kicking a soccer ball. Throwing balls. Running. Hiding from mommy. Coloring.

Challenges: Timeout for hitting. He’s a regular visitor. He, fortunately, seems to show remorse and when I go to get him out, he says (and signs) “I’m sorry mommy” and is very loving. He usually only hits when we’re playing around and he gets excited or when he’s overtired, but malicious intent or not, I’m trying to curb that as quickly as possible. So, boom, straight to TO. (Two minutes in a chair facing the wall in the dining room. So far, knock on wood, he’ll stay there.) Generally trying to avoid power struggles: if I can offer him a choice, it’s usually better. Instead of saying “We need to go upstairs and change your diaper,” to which he screams no and runs and hides, I try to say “ We need to go upstairs and change your diaper - would you like to walk or would you like mommy to carry you?” (He usually says walks but keeps standing in there… then I start counting to 3… then he runs to the stairs… it’s a work in progress.) There’s at least one meltdown per day. It’s white noise now. When he does something he knows he was supposed to, he tells me “Good boy, issen ears” which is his version of “Good boy, you used your listening ears” which I must say a hundred times a day.

Sweet Bo, you’re two! How is that possible? In some ways, I’ve been rounding him up to two when strangers ask or when signing him into the Y nursery that it doesn’t feel weird to say he is two… But on the other hand, when I think about holding that little baby in my arms in the hospital room on the first early morning, watching the sunrise and the morning commute on Silas Creek Parkway, I think to myself “that can’t possibly have been two years ago.” As someone wise said, the days are long but the years are short. I try to remind myself of this when I’m standing on the stairs for what seems like an eternity while someone tests out every railing (“not safe!” for the wobbly one, “this one’s safe!” for the rest) or think I’ll never make it past this stage of having to avoid getting kicked in the chest for every diaper change. Reminding myself that it won’t feel very long before I’m a middle aged woman with teenagers looking back at these years helps me to immediately grasp how precious these days are - how sweet his tiny voice is, how quick his little impish smile is, how snuggly he is when we are reading books, how his tiny hands gets lost in mine still and how his little round belly still pokes out over his diaper after a full meal. As spirited and challenging as he can be, he shines when he’s praised or when I catch him being good - “good boy issening, mommy” and comes running to find me when he’s done something he’s proud of (like stacked up all his trucks in a line) and says “you can show me, mommy! show me!” when he wants me to see it. Love the pronoun swaps! He’s started saying “I love you” unprompted (“I yuv you”) and tells me every night when I’m tucking him in “I need a hug. I need a kiss.” While I was getting dressed for church the other day he came in and told me “Mommy, you look pwetty.” He’s such a sweet, sweet kid. And so social! This boy loves nothing more than having everyone’s attention on him and is quick to figure out ways to make everyone around him laugh. He is definitely not an introvert like his dear mama. It is amazing seeing his personality emerge and getting to imagine the little person he is growing up to become. I wish I could bottle up some of these moments so I knew I would remember them always, but it’s also so fun to see his world get more and more expansive each day.

Happy Birthday, Bowen boy. We are just so lucky to be your parents and love being with you as you burst through this world with a huge grin on your face, a monster truck in one hand and a handful of ya’ya’s (cheerios) in the other. XOXO 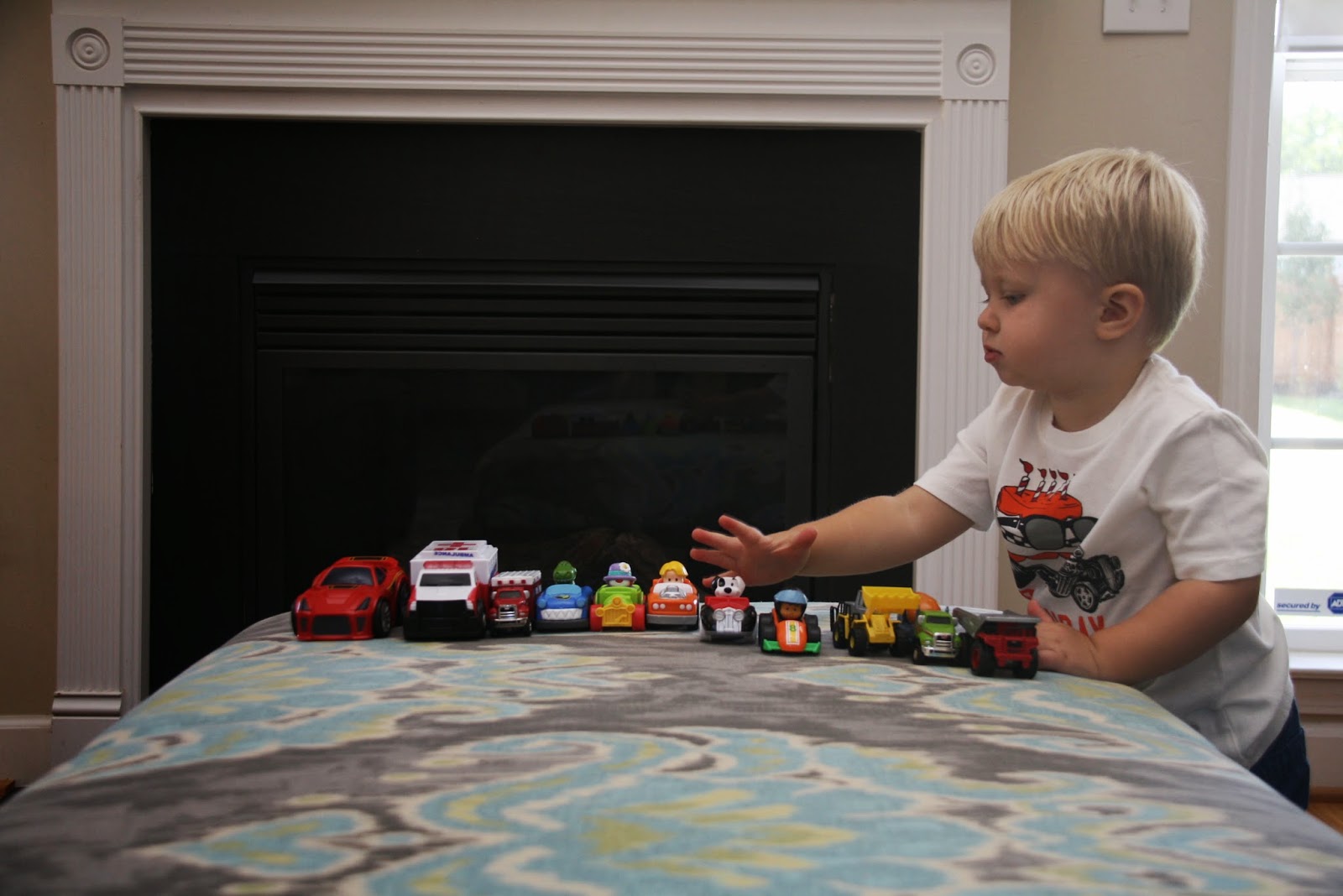 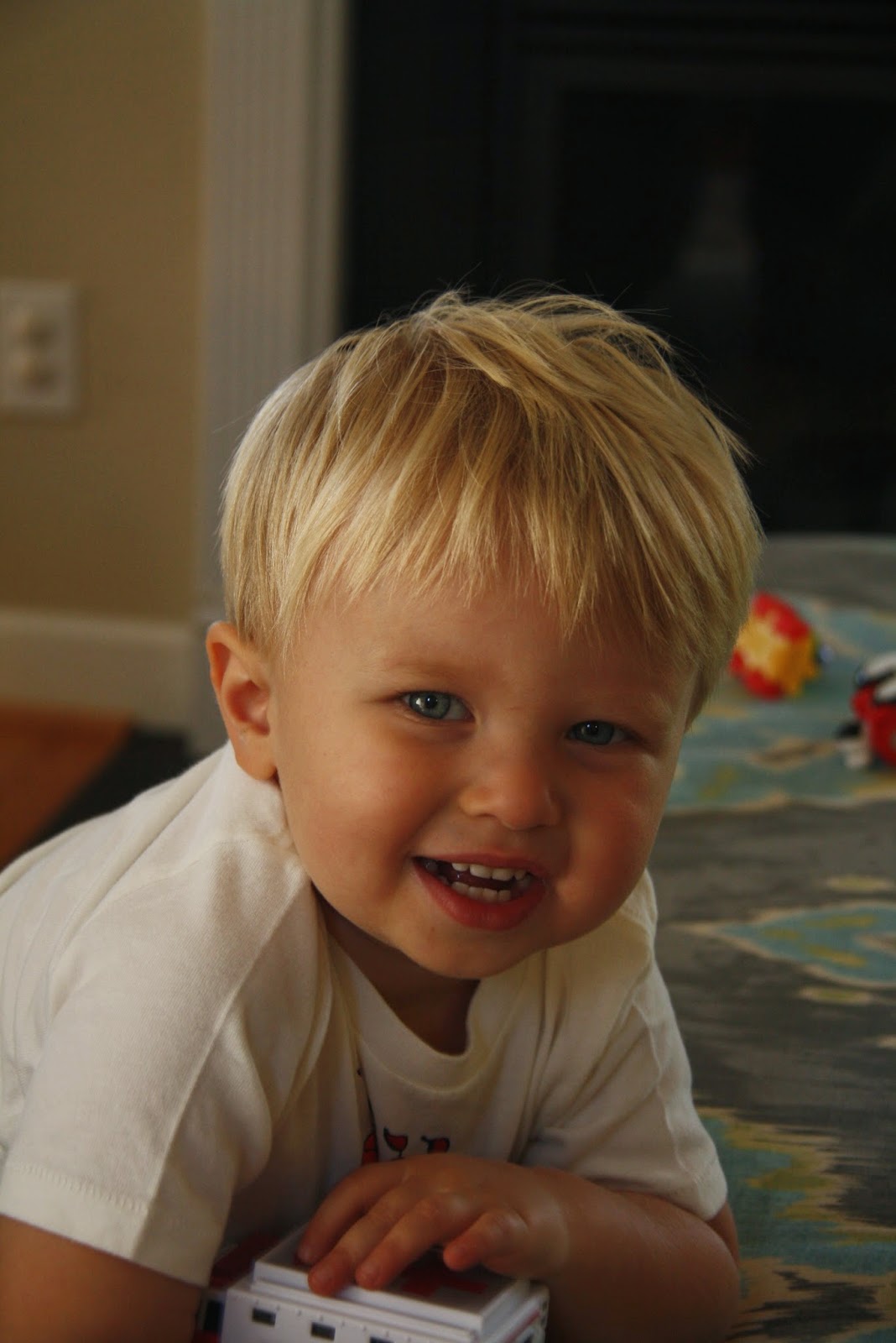 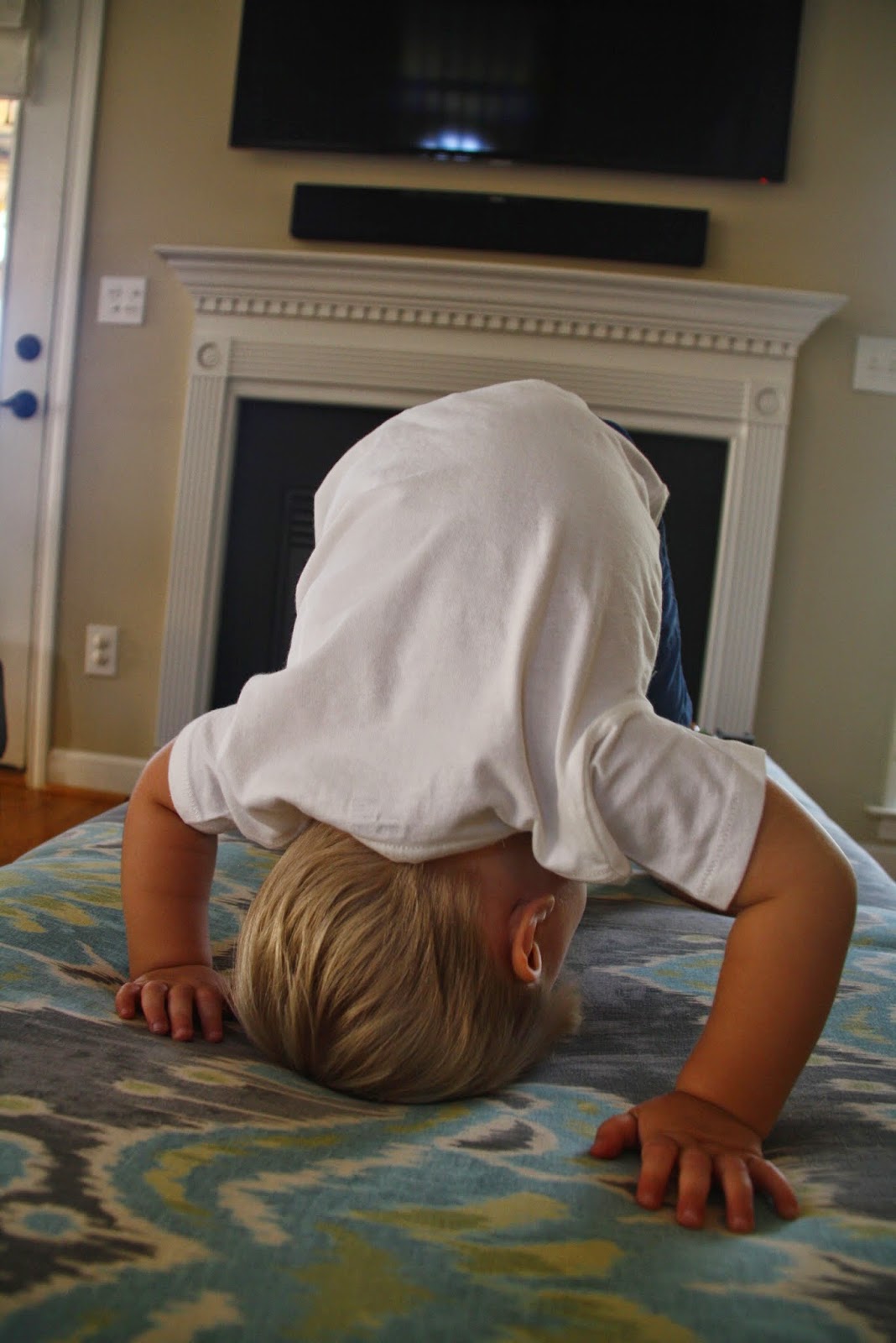 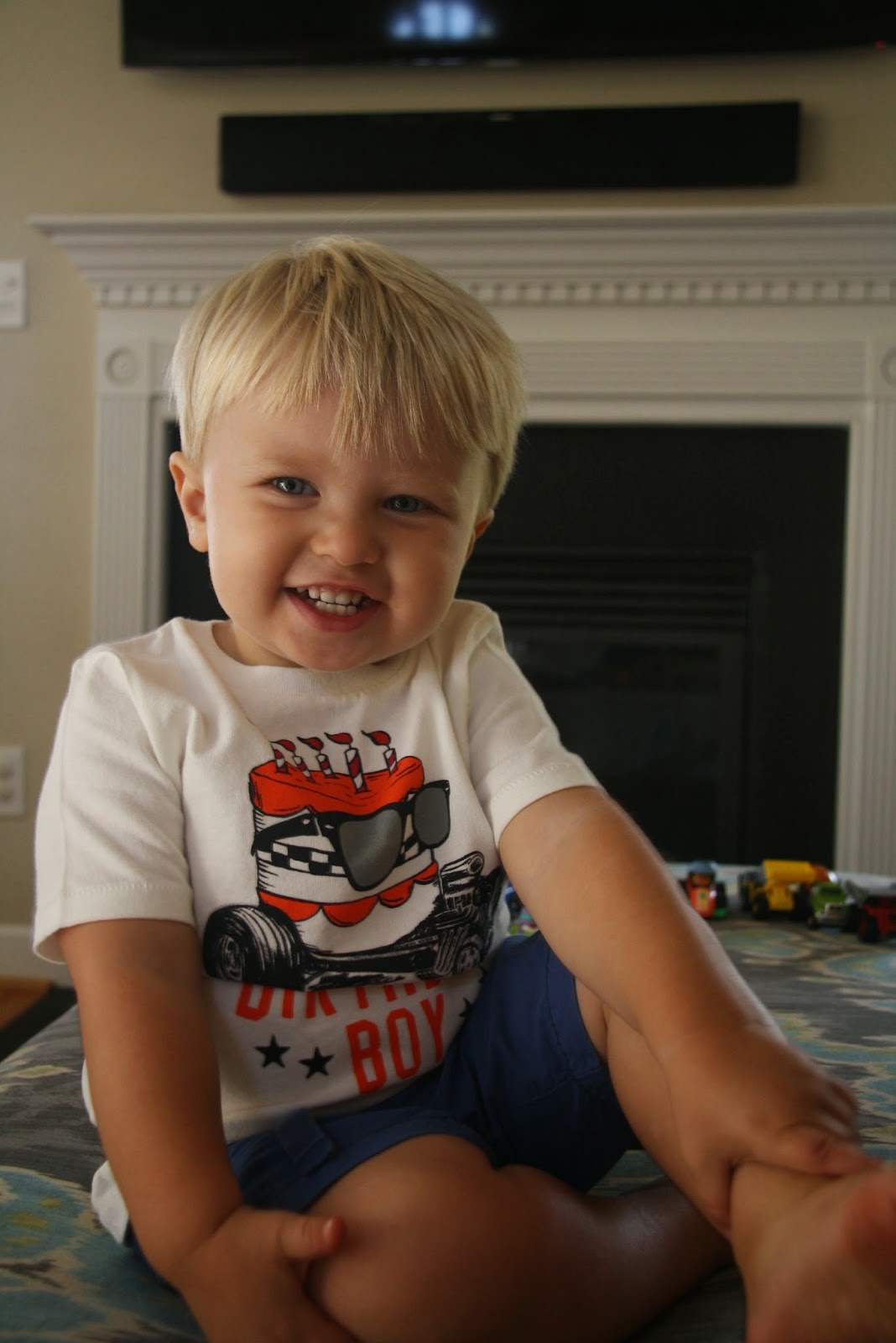