... That I just performed in front of a bunch of strangers for the first time in over ten years to a song I'd practiced for merely a week? 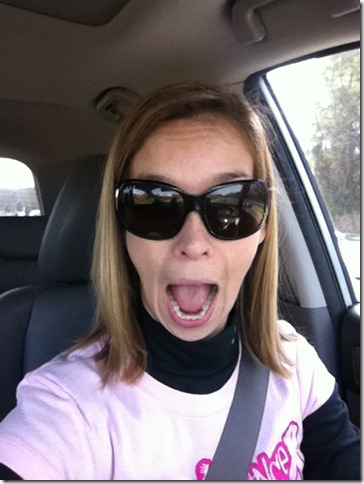 Somehow our dance trance instructor talked us into performing two dances at the awards ceremony of the Mistletoe Run at the YMCA.  It sounded like a good idea at the time, but about 5 minutes before we went on I thought I might throw up of performance anxiety. Luckily, it was kind of a random crowd milling about and the music started and I had no time to think about it anymore. It was fun, I got to support my dance trance instructor who I just love and my sweet friends Teri and Akanksha (dance trancers themselves) were in the audience cheering us on.

Oh, and let me just take a minute to give a nod to Teri, who set a personal best on the half after deciding to run it the night before, and Ak who ran a 5k at 27 weeks pregnant.  Ya'll rock. 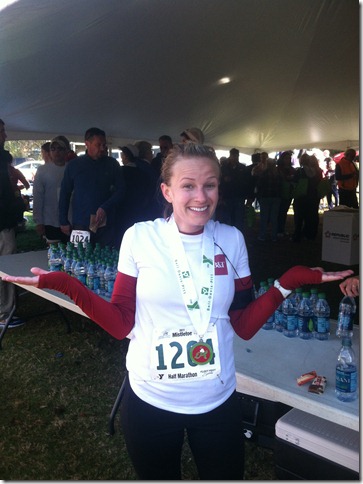 And now, a moment to wax poetic about DT: I hope our little performance inspired a few people out there to try Dance Trance.  It
wouldn't be a huge stretch to say it's one of the best things I've done for myself this year.  I actually did DT for 2 years when there
were instructors teaching it at Wake, but then they graduated and no one picked up the reins.  I was thrilled when Stephanie started it up in January of this year, and I've gone almost every Tuesday since then.  It's my happy place.  I'm by no means the best dancer, but I love dancing.  It challenges my mind in learning and memorizing new dances, but it's a mindless space once I learn them where muscle memory kicks in and I just move.  I love running, because I get such a good thought space going on - I can brainstorm problems, I can think of new ideas, I can work through frustrations.  But DT provides me the opposite - if I start thinking about my stressful work day, all of a sudden I'm tripping and losing my place.  DT gives me an hour to turn
OFF my brain and just move.

It also helps that some of my best friends here do DT too - Jamie, Anne, Akanksha, Teri, Kathleen - so every Sunday or Tuesday I know I will get to see my friends (and that they will hold me accountable if I don’t show up!)  It’s just been such an important part of my year and I haven't had any specific reason to write about it yet… so here we are.

Or I could just stop taking and share this.  (Thanks Teri for recording us!)

This was such a fun day for so many reasons! :) I am so impressed that you danced in public. I don't think I would EVER. Granted, you are a DT pro so it's a little more acceptable to shake your booty for the world.

Yes, I'm binging on your blog. I'm stuck on a plane.