We had so much fun at Salute last year, we went back for more this year.  It was unbelievably hot out.  It must have been well in the high 90s.  Anne, Akanksha and I had a very specific strategy: we didn’t touch a single red or sweet white, and we chugged my water bottle in between tastings.  I love this event – it makes me proud to see all the great wines coming out of my little state!  Way to be, NC. 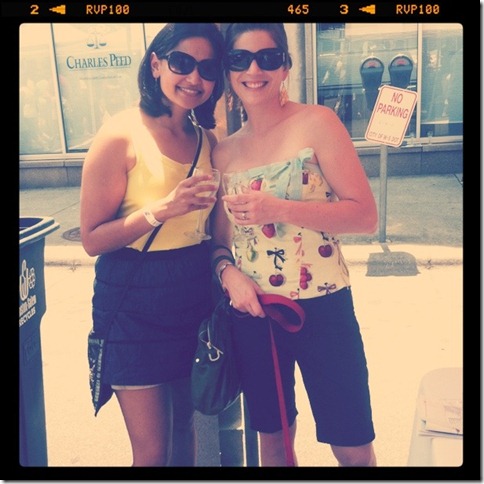 We also took lots of water breaks for Buddy, who is on the other end of the red leash in Anne’s hand in this picture.  He was quite the attention getter!  I kept having to tell people that no, he’s not a puppy…he’s an old man!  Must be the buzz cut. 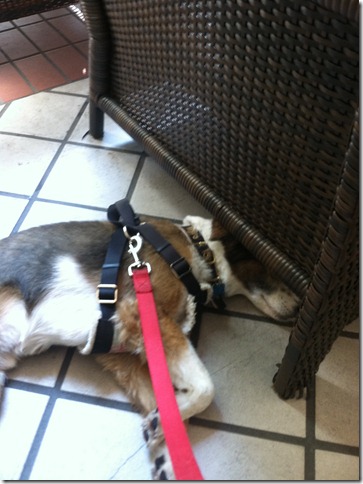 We took a food break at Rana Loca and my old man doggy passed out on the cool tile.  Shortly after, we met up with our friend Loren, and then Kate & Charlie joined us and we attempted to venture back out in the heat with our growing crowd.  I didn’t last too long on our second go round, and I could tell the Spuds was really to get outta the heat, so I hitchhiked a ride back from Matt who was on his way back into town from the airport.

I also had the fun of running into a friend I’ve talked to on Twitter for the last few months!  I adore reading Teri’s blog – it’s a happy marriage of so many things I love: she’s a foodie, a fitness geek and possibly as obsessed with her dog as I am with mine.  I felt a bit stalkerish to tap her on the shoulder as I saw her walk by and introduce myself, but she is just as sweet and cute as can be in real life.  I love when internet world collides with real world.

All in all, we had a super fun day exploring our state’s vineyards all contained in a couple of city blocks.  We managed to survive the heat, and the other disappointment of the day was that the peach bellini machine had quit working.  After we called it quits for the afternoon, we were lucky enough to be invited over to Tim and Crystal’s for some delicious fajitas complete with homemade tortillas that Crystal’s momma had brought up on her last visit from San Antonio.

What a fulfilling day.

well you just made me blush! i felt a little bit stalkerish when I met you in person too because I was so excited about it! :) I felt like we were old friends!