I was in a mood today.  I think I know why, and it’s not worth going into, but suffice it to say it wasn’t anything that was worth being all cranky for.  I was just having a pity party for myself. I was super snarky at work (not to my coworker, who is just the sweetest person ever) but about things at work and I hate that feeling of being just so easily irrated.

I tried all my usual tactics that snap me out of a bad mood, but nothing was really working.

I got a Grande Dirty Chai and as a bonus, 10 FREE songs!  Really good songs too.  I even paid $1.29 to download Pumped Up Kicks.  I’m obsessed…and it helped a little. 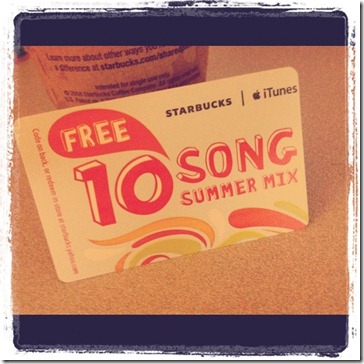 I started a Thankful Thursday list… (I got busy & didn’t finish… probably would have helped to keep going.) 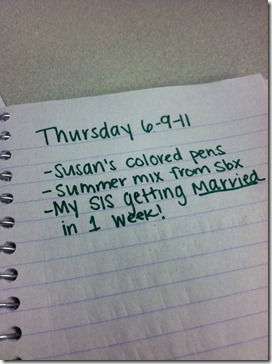 I painted my nails a new color – gold with pink shatter.  It too helped a teeny bit. 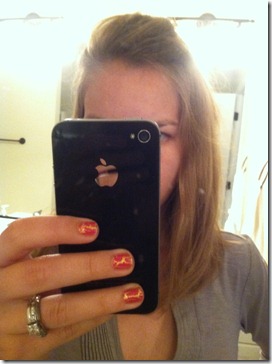 6:30 rolled around, and I headed out the door.  And then I remembered….

My high school best friend was in town for a work convention and I was going to pick her up and go to dinner at Mozelle’s.  Oh frabjous day!

Krissy and I haven’t lived in the same city since 2000, when we graduated high school.  Shortly after, her family moved from our small town so I don’t even get to see her over holidays at home.  But we are amazing at finding ways to get together, even for short interludes.  We call them our high fives.  Senior year of college, we discovered that Krissy was going to be getting off the cruise ship the same day I was getting on the cruise ship.  The exact same cruise, out of the exact same port.  If you’ve ever been on a cruise, you know how chaotic boarding and disembarking is.  We joked about how amazing it would be to see each other on the dock, but didn’t actually attempt to coordinate it.  So when it happened?  Crazy amazing.  High five.

I also passed right through the small town that Krissy’s college, Bucknell, was located in whenever I drove home for Christmas or end of the year from Wake Forest to Rochester.  Since Krissy no longer lived in Rochester, I would often call her as I was getting ready to drive through Lewisburg. I’d pull up outside her dorm room, she’d come running out, we’d jump up and down and hug, and then I’d continue my journey home.  High five.

Kris was only going to be in town for about 20 hours – just enough time for us to have a quick meal – but I was literally buoyed when I remembered I was going to get to see her.

It turns out SHE was having a terrible day too, thanks to horrendous air travel snafus and the fact that was taking one for the work team by going to this conference anyways on the eve of her 2nd wedding anniversary.  So we were both in a MOOD and thanking the heavens it was $4 vino night at Mozelle’s.

We’ve been best friends since we bonded in 8th grade enrichment over our shared love of the oldies, while everyone else was listening to Dave Matthews Band.  We eventually both came around to love DMB too, but I still have an urge to call her up anytime I hear certain songs like “Knock Three Times” or “Hello, Lamp Post” on a store intercom or commercial.  Though we have lives in cities far apart,15 years of history lets you pick up the pieces pretty darn fast.

Our 2 hours disappeared like nothing while we drank champagne, watched the sun go down over the city, ate an amazing meal and talked about our lives.  And just like that…. 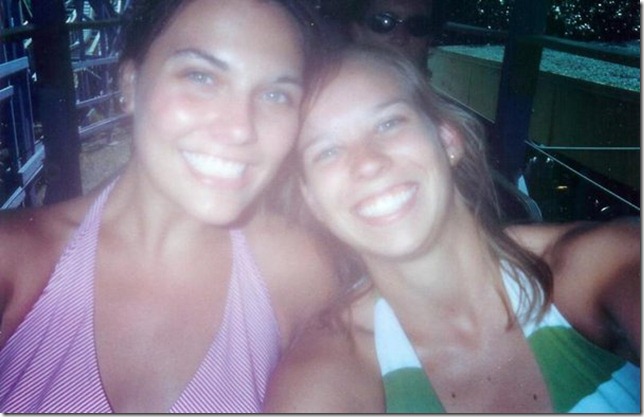 (PS, Happy Anniversary Pooks.  I love you both!)

I grabbed that music thing from Starbucks the last time I was there after I saw you post about it here. I'm so glad you did - it's freaking awesome!

And we need to plan our get-together! Lunch sometime? Email me! terilynz@gmail.com

Hey love! Just read your blog needing a pick me up after the chaos of this weekend. Had no idea you'd written about our high fives! (almost wrote hives there...oops). Love that you totally could've fooled me on being in a MOOD too! I saw you as my white knight (knights who say ni?) who picked me up with a sweet and cuddly buddy dog and a granola bar for the morning and took me for much needed food, wine and best friend restoration. So glad we got to see each other--I had a blast! Love & miss you lots!

Hey love! Just read your blog because I needed a pick me up after the chaos of this weekend. So happy to see the mention of our high fives! (almost typed hives there...oops). You totally fooled me as being in a MOOD. I saw you as my rescuer, picking me up and bringing a sweet and cuddly buddy dog and a granola bar for the next morning and making sure we both had some good food, champagne and best friend restoration. Much needed and had so much fun catching up! Love & miss you lots already and can't wait to see where the next high five occurs! xo