Whoever came up with the idea of potlucks, I’d like to officially nominate them for party hall of fame awards. (Pretty sure it’d be right up there with parties involving foam, that one where you have to go hand cuffed to your date, and my cowboys & ballerina themed birthday party. Where some of the cowboys dressed up as ballerinas.) I DIGRESS.

A few days ago, we realized it was going to be one of those rare stars-colliding weekend where all the boys had the same Saturday night off. (Although, sadly, Locke had to go in at 5 am… but he was a trooper and made it out anyways!) Someone suggested a potluck – Italian themed – and in a matter of hours, we all had our designated dishes decided. 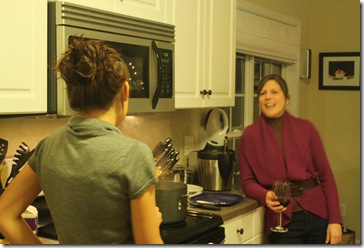 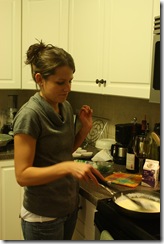 Who’s cooking in my kitchen? Not me!

We were all a little nervous the impending snowstorm was going to keep our shindig from happening, but everyone braved the storm with either trusty SUVs or Chicago/Utah driving instincts and while the ground froze over, the party heated up.

Everyone’s food was delicious, and the cabin fever we’d all been experiencing turned otherwise benign games like Scattergories and Cranium into shouts, shrieks and slander. Just your typical board game experience, right? From board games, we moved on to Guitar Hero, which quickly became divisive as spouses went up against each other. 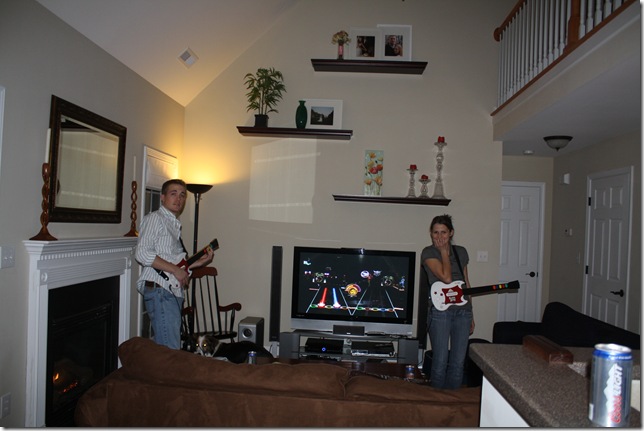 Not sure whether that is the look of a surprised winner or chagrined loser. You decide.

It’s funny how sometimes the most impromptu, informal plans can become the most fun nights. It makes me very thankful that we have friends who will brave snowstorms and show up with fettuccine at a moment’s notice. It doesn’t get any better than that right?

Unless, of course, I could actually beat those friends at Guitar Hero.

(PS, the requisite photos of all the food are on MegEats. Go here for some drool-worthy pics.)