Today was my husband's hooding ceremony for his medical doctorate. Although the graduation for all WFU candidates is Monday, this is a smaller ceremony that focuses on just the medical class and I think really just sets aside time for the family of the now DOCTORS to celebrate what they have accomplished. 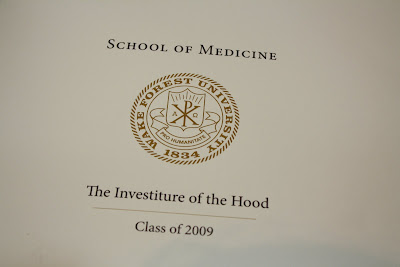 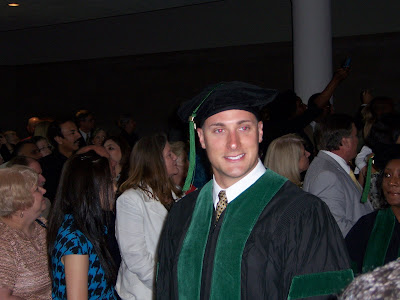 I'm not a parent, but I imagine one of the first things you do when you find out you're pregnant is start imagining what your child will grow up to be. I wonder what it felt like for all the parents there to sit there and gaze upon their very grown babies and think back to all that they hoped for them. I imagine that that is a kind of happy/proud where words would just fall short.

Ever since I have known Matt (we met as sophomores in college), we have referred to this pursuit as "the doctor's path". Sometimes in jest, sometimes in conflict, but always on mutual understanding of the priority that was given to "the doctor's path." Becoming a doctor has been his single greatest focus for more than a decade. A decade! At 13, he hurt his knee playing football. A trip to the orthopedic later and Matt just knew he wanted to be a doctor. An essay he wrote shortly after this event in 7th grade describes not only how he is going to be a doctor, but he's going to attend Wake Forest Medical School.

I know, right? At 13, I wanted to be an architect. And an author. And a teacher. And, oooh, a psychologist! In other words, I had no idea.

Talk about a single track mind.

The doctor's path has been many things: stressful. challenging. confusing. surprising. bonding. fulfilling. None of these words fully encapsulate the journey I have watched my husband persue single-mindedly for the 8 years I have known him, and the one I joined him on when I became Mrs. To see him stand up there and take the Physician's Oath and know that years and years and years of commitment, focus, determination and sacrifices have culminated in a one single ceremony-filled weekend that marks the transition from student to physician? Amazing & inspiring.

If I write any more, I just may lose it. Congratulations, Dr. I am so proud of you.