Yea, it actually is kind of crazy.  But amazingly, when you're with good friends something as crazy as driving 14 hours road trip to run 13 miles does actually become fun.  Or in my case, watching good friends run the 13 miles - even MORE fun.

Somewhere around Christmas both Matt and Anne got it in their heads they wanted to run a half marathon. Anne picked out the Nashville Country Music Half - proclaiming she needed music at every mile to keep her motivated - and Matt decided while we were visiting Nashville at Christmas that that one would suit him too.  Soon after, Locke signed up, our friends Rick and Stephanie joined in, then Anne convinced her sister Jane and boyfriend Nick to join.  A few weeks later, I convinced Heather - who had told me one of her 2012 goals was to run a half marathon - to sign up for this one and she got her friend Anna on board.  THEN I learned one of my high school besties, Tamara, was running it too.

I had my hands full as super fan - that's 10 runners if you don't feel like counting.  I've never been to a half as a spectator before and it was a really cool experience.  I was glad I'm enough of a compulsive planner that I had mapped out ahead of time where I was going to park and wait for the runners, because I had picked out a spot that allowed me to get to see everyone at mile 3 and then walk about 5 minutes to get to mile 10.  My mom was a huge help by watching their chip times from the computer at home and texting me when to expect people so I could know when to look - because I totally underestimated what 35,000 runners streaming by would like look.  (Hint: a tidal wave of sweaty, grimacing faces.) 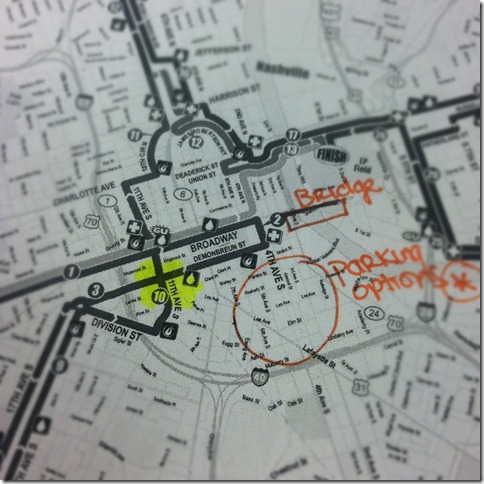 I couldn't believe every time I actually found one of my runners in that mess but I was so proud to see each one go by!  My parents have always been loyal spectators to my events - even driving down from Baltimore to surprise me and Jamie when we ran our half and my Dad jumped in for a few minutes at mile 11 with me - and I felt like I got to "pay it forward" a little bit by being there on the sidewalk for all my runners. 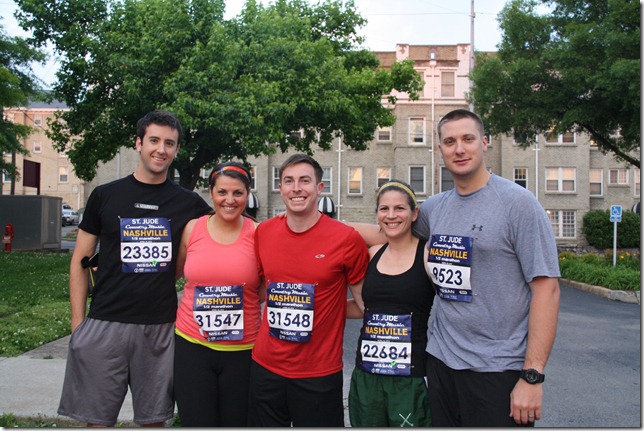 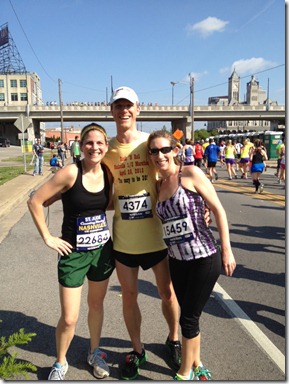 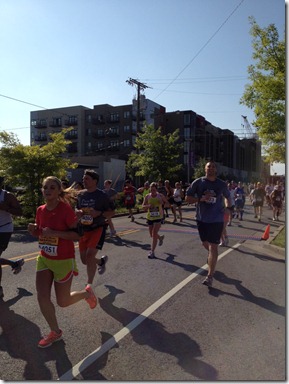 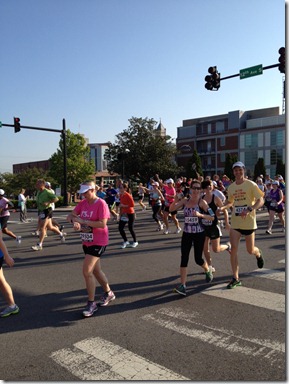 My friend Tamara sent me this video her Dad took – he was filming sporadically throughout the run and I literally was standing at mile 10 and went “who is this guy running backwards filming?” before my brain immediately clicked in and recognized him – as my best friend from high school’s Dad!  I keep laughing when I watch this video because right around 30 seconds my little voice in the wind is yelling “Tamaaaara!” and we saw each other for approximately 10 seconds but it was a joyful 10 second reunion!

They all did so amazing. For everyone but Rick, it was their FIRST half marathon!  And it was not an easy course - some brutal hills and the April day ended up being near sweltering by the time the race finished  It was fun to bear witness to each of my friends and my husband accomplishing something that they could now check off their bucket list. 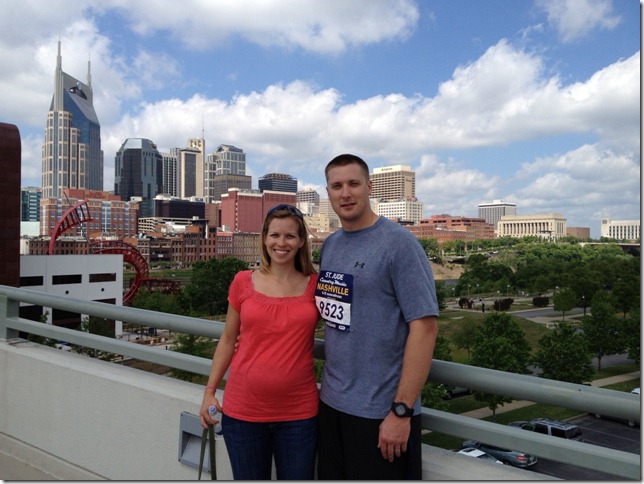 Besides the race, we have a great time in Nashville on our short tip.  We went out to dinner Friday night with the whole crew at a cute place called Cabana's where we got our own little private booth and the runners pre-gamed with pasta and lots of water.  It was the first time I'd seen Heather since she moved to CT a year ago!  We were happy to be reunited, even for a brief dinner and a high five at mile 3. 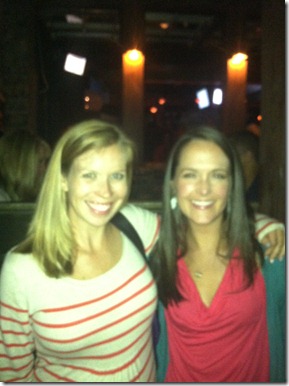 On Saturday, the runners crashed for naps afterward (the BEST feeling) and then we headed back downtown for dinner at Bosco's Brewery (which was really good!) and then we even found a little bit of energy reserve to go out downtown and find ourselves a spot in a Honky Tonk.  When in Nashville, right?  Not bad for a crew of post-racers and a preggo.... although I can't say anyone felt an extra inclination to do some two stepping or even walk to another bar once we got situated in our first one. 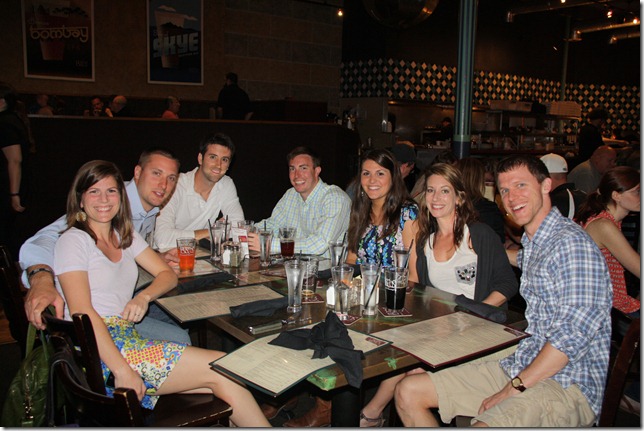 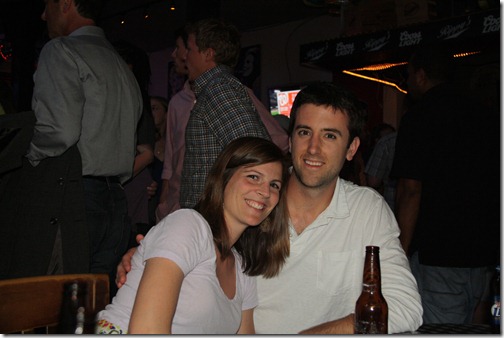 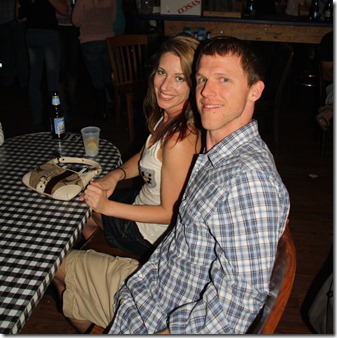 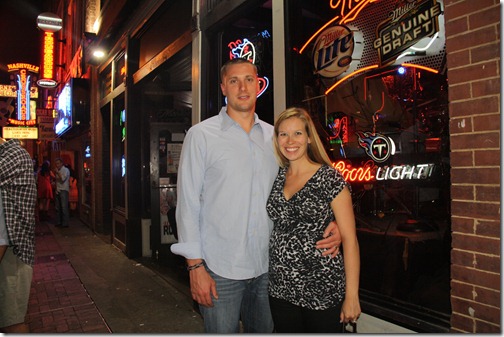 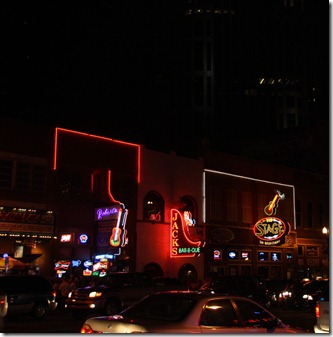 Then we woke up Sunday and headed on back home to the Dash, and just like that an event that was 4 months in the making was over!  Congrats, runners!  (Who is ready to sign up for another????)

So fun! I had a bunch of friends running that one too!

Thanks for being our support system! It helped seeing your smiling face twice during that looooooooong run!

Of course it's always fun doing things with the Clines!

Ahh can you believe we did that? Loved it and love your post!

It's great to see a post from a spectator view for this event! I'm running the half this weekend and my parents are coming in from Ohio to watch. They've never been to a race of this size before so I'm trying to set them up for a great event! I was also thinking of having them hang out around miles 3 and 10 but knowing them, they'll also want to be at the finish line at LP Field. I think this is near impossible as they wouldn't be able to walk there by the time I finish (assuming my legs are still functioning well :) ) and I don't think there will be an abundance of taxis nearby to help them out. Do you agree? I want to make sure I set them up with realistic expectations which means they may not see me at the end. Any advice would be great!