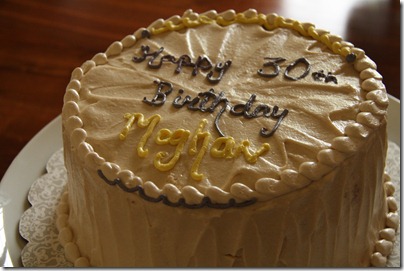 Last year when I turned 29, there was a really popular blog meme going around called "30 x 30."  It entailed making a list of 30 things you wanted to do before you turned 30.  I love lists and I love projects, so I of course thought it was a great idea.  I wrote my list in my little notebook where I jot down ideas, gratitude lists and inspiration and put it away.  I thought about it from time to time, and glanced through it once or twice, but didn’t necessarily make a conscious effort to follow through with the things on the list. The day before my 30th birthday I pulled it out... and realized I had only done 5 things on the list.  Oops.  So much for that project.

So instead of focusing on the fact that I have not perfected a dish with bok choy in it or run a sub 30 minute 5k, I decided to start a new list from scratch.  I was inspired by Glamour's list of 30 things every woman should have or do by the time they were 30 and I started drafting a list of 30 lessons I've learned by 30.  It was hard to think of ideas at first, but once I got the ball rolling, it was a fun way to reflect on some of the last 30 years of my life.  Some of the lessons are things people have said that have stuck with me, some were learned the hard way and some are just the source of really good stories… and obviously, it’s by no means exhaustive.

But it was a fun way to reflect and makes me kind of curious to know what I'm going to learn over the next 30 - and wonder what I'm going to end up going through to learn these lessons.  So here's my final tribute to myself on my 30th birthday (oh hello, narcissism) and MY version of a 30 x 30 list:

1. Don't take it personally.  Someone's rude behavior or hurtful comment is more about where they are coming from than how they feel about me.

2. Set the timer for 5 minutes. This was my Grandma's trick.  I often procrastinate small tasks like emptying the dishwasher or folding a load of clothes because I overestimate how long they are going to take.  My Grandma always said to set the timer for 5 minutes and tell yourself you'll do the task for just that long.  I'm usually done or almost done by the time it goes off.

3. I don't have to explain why when I say no.  And in fact, sometimes the less I say the better.

7. I don't have to finish every book I start.  There's just too many good books out there to waste time with a bad book.

8. Having a great relationship with your mother is not something to take for granted.

9. Something is better than nothing.  This applies to exercise, writing, and cleaning the house.  Just get started.

10. Nothing is better than something.  This applies to toxic relationships.  Just get out.

11. It's much easier to ask difficult questions when you come from a place of curiosity instead of judgment.  Just saying "I'm just curious, why...." often makes people put their guard down and answer tough questions honestly.

12. Never, ever go to the grocery store straight from the gym.

13. Deduct savings at the beginning of the month.  Get the company match.

14. Be nice to customer service reps on the phone.  Pay attention to their name and use it.  They rarely are the ones who have messed up whatever you're mad about it, but they might have the power to get you to the right people who can fix it.  At the very least, remember that they are regular people sitting in a badly lit office developing carpal tunnel syndrome and you can either be grumpy like everyone else they talk to or be that one pleasant call they have all day.

15. 3 things I really hate doing but are worth it in the long run: packing my lunch, blow-drying my hair, taking the laundry out of the washing machine and switching it to the dryer when it's done.

17.  Read the recipe all the way through once before you start.

18. Sometimes "Everything happens for a reason" is a great way to practice acceptance.  Sometimes it's a defensive mechanism for not getting out of a bad situation because you're scared to take action and move forward.  It's really crucial to know the difference.

19. I will never be able to say thank you enough times to my parents.  (But I’ll keep saying it anyways.)

20. The secret to being a great listener is stop trying to "relate" to someone else's story by immediately following theirs with your own version of it.  Just shut up and listen to their story.

21. Being consistently late sends the message to other people you think your time is more important than theirs.  However long you think it will take you to do something or get somewhere, multiply it by 1.5.  You'll show up on time or finish projects ahead of time.  With all that free time, you can make really long blog post lists.

22. Wedding drinking strategy: cocktails during cocktail hour, wine with dinner, beer on dance floor, water on the way home.  Never go back once you've moved on to the next stage.

23. If you are driving 60 mph and have to be somewhere that is 20 miles away, it will take you 20 minutes to get there.  If you drive 70 mph, it will take you 17.25 minutes.  You'll save almost 3 minutes if you speed another 10 mph.  However, it will cost you about $350 to pay for the lawyer to go to court for the speeding ticket.  I retained the first fact from Driver's Ed in 1998.  I learned the second fact about a year ago.  I hate being late for things, but I try to remind myself that speeding doesn't really get me there any faster.  Learning to leave the house with enough time to spare (#21) is what you gets you there on time.

24. He who talks last, loses.  Silence often makes people uncomfortable enough that they'll just start rambling.  This is a good thing to remember when you are negotiating.  (Thanks Dad!)

26. In many cases, it is better to ask for forgiveness instead of permission.  (Thanks again, Dad.  And you were smart to wait until I was 18 to teach me that one.)

28. The more I learn to sit and let uncomfortable feelings pass and acknowledge that they are going to be temporary, the less power a box of wheat thins has over me.

29. Investing time in relationships with girlfriends (including sister!) has had the greatest positive impact in my life.  Make dates with them, send texts just to say hi, make yourself a note when they tell you they have an interview on a certain day or a doctor's appointment or are going to run into an ex at a wedding and follow up.  And for the ones in my life that make it a point to do those things for me, I try to remember to always tell them how grateful I am for their friendship.

30. Before you put it on the internet, imagine your boss, your grandma and your future children reading it.

This is fantastic! So many of these are on my own list of things I've learned by 30. My favorite is the one about not finishing a book. This came to me in the past few years, but it is so valuable. Why waste your life on something bad when you could be spending time with one you enjoy?

I love this list! So many valuable lessons learned. Even a few new ones (for me) that I will take into my next 30+ years.

you really are one of the wisest women i know and i'm so happy to count you among my friends. you are such a blessing! i really need to remember 2, 3, 20, and 28. and i'm going to implement #22 this weekend. :)

That's a great list! Don't tell anyone that I break rule #12 all the time, though :)

I just turned 30 this May as well, and just had to comment to tell you have much I love this list. So many (actually, perhaps all) resonated with me- really great post. Thank you for sharing!

You could write a book with this, really! And I'd buy it.

(I pinned you! I coming back & referencing this for inspiration often!)