You Mean to Tell Me Some People Eat That Part of the Chicken?

On Tuesday night, I attempted cooking my first WHOLE chicken. I knew that cooking a chicken required the removal of the disgustingly named "giblets," but I was under the assumption that said gibs were in a handy plastic bag that just required the simple removal of from bird cavity. No, my friends, this was not the case. MY giblets were about as neat and tidy as 9th grade biology class, minus my lab partner jabbing at things with a scapel. (I did not need to see the fetal pig's BIRTH CANAL. Ever, ever ever.) No, no, my giblets were just hanging out inside the bird waiting to be removed by someone with a stomach of steel. "MATTTHEWWWWW!"

Nope. My dear, sweet wonderful husband made ME remove the giblets. Apparently this was a lesson in "stop being a wuss." Simultaneously holding back tears and vomit (ok, a bit much), I alternated spraying the nozzle from the faucet into the body cavity and then shaking the chicken over the garbage disposal. Post-dinner clean up involved a Lysol-ing of the sink, my arms, the cabinets, the coffee maker... pretty much everything in a 5 mile radius. The neck finally fell out, followed by the liver (gag) and then the heart (double gag.) I deftly removed the neck bone with my hands securely ensconced in a Wal-mart grocery bag and ground up the liver in my garbage dispoal. Yes, friends, I just ground up some organs in my disposal. Good to know the insinkerator can handle that.

Once I got over taking out the gizzards, the rest was reaaaaaaaaaaally easy. I just smushed some lemon slices, rosemary and thyme up under the skin and gave that sucker a little olive oil bath. I put it on top of potatos in a pan and baked the whole thing at 350 for 1:40 min. SO EASY. From it I got: 2 chicken breasts, 2 drums, 2 wingies, and some meat I pulled off the bone and made a chicken salad out of. The whole chicken cost $4. So that's like easily 4 meals (or feeding maybe ~3 people) for el cheapo. Definitely worth doing BUT buy the chicken where the giblets are in the bag you just pull out.

In other cooking news, last night I wanted to make these sweet potato gnocchi I had bought on sale at Teeter. I asked a "graduate" of mine, who is a super duper talented chef (ie. has his own restaraunt, cooking store and his own tv show once) what kind of a sauce to make. He suggested I take apple juice and simmer it on the stove top while slowly adding ground walnuts to thicken it. Sounds amazing right?

I'm sure it would have been if he cooked it, and maybe I was missing something obvious, but it was muy ter-rible in my version. It tasted like baby food. Mushy pasta with applesauce on top. GOURMET COOK FAIL.

Sigh. Being chez gourmez is so hard. There are organs to deal with and sauces that don't turn out right. No wonder Shake'n'Bake and Prego make bajillion dollahs. 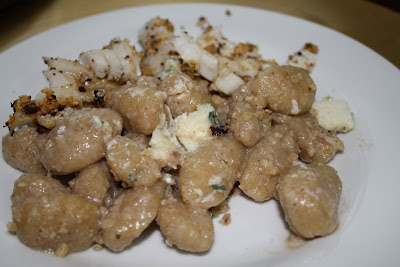 Sweet potato disaster.
Posted by Meg at 8:59 AM