The idea of actually going out and running the race that I signed up for, the Charlottesville 10-Miler, scared the beejeezus out of me since I didn't train for it. AT ALL. As in, I ran once from January 1st to April 4th. And I got a cramp. Physically I assumed I was capable - I have run that distance before in my life, but I had always been training and running regularly up before those runs. So up until the night before, I still wasn't sure about whether or not I wanted to run. I was afraid: afraid I'd get out there and not be able to finish (omg, 5 miles to the finish line.... I'm stranded, AYEEEE), or it'd hurt (umm, yes, for real), or I'd just really not enjoy it and the last thing I wanted was to start disliking running. It's hard enough to fit it into my week, and I enjoy it so much!

I woke up the morning of the race and decided WTH. The don't-do-it reasons were pretty arguable (especially the not finishing... hello... I can WALK.) My plan was to wear my watch that paces me and walk a mile, run a mile. Considering my run pace is just mere milliseconds faster than a walk pace, I didn't imagine this would take me too much longer than the running (sprinting) winos.

After the first few miles, I knew I physically didn’t need to switch to a walk pace. Mentally was another question. I was fine until 7, and then the wall hit. Miles 7-8 I distracted myself with my usual reverie (one that almost always involves envisioning myself on Oprah, and/or working on the Biggest Loser… yep, that’s how I get through my mileage.) Mile 9 hit hard. I kept looking down at my watch, and the tenths of a mile ticked... on... by. Around 9.3, I started praying. “God, you pick up my legs, I’ll put ‘em down.” As my running shuffle came to an end, I put on a Jars of Clay song “Carry Me.” CHEESY. Whatever - I needed it. At 9.4, we hit a hill. A big freaking hill. Whose grand gesture was that? Thanks, Charlottesville. I prayed feverently, knowing it was not going to be me that got up this hill. Amazingly, I hit a stride and my legs became light as air. Tears pricked at my eyes as I became overwhelmed with this feeling of ceding control, yet feeling totally in control. At 9.8, Mercy Me’s “I Can Only Imagine” came on (on shuffle). Not exactly the tempo of my usual pick-me-up songs (generally Cascada and DHT are my booster songs) but I felt my speed pick up as the chorus line swelled, and the finish came into sight. As the line of those waiting came into view, I saw Jess, Jenny, Emily and Shelby jumping up and down screaming my name. I ran by yelling “I didn’t walk! I didn’t walk!” and collapsed into their arms at the finish line, overcome with surprise that my legs had kept moving the whole time.

I was way surprised at myself – I think I often times underestimate my mental toughness. Maybe it’s because I quit a few things early in life – I quit JV softball after Coach Hans yelled at me for missing a crucial pop up in right field, and I quit my job at Pontillo’s on my 2nd day after my boss got mad at me for forgetting to ask an order with “peppers” wanted sweet or hot. This idea that I don’t have stick-to-it-veness has stuck with me for a long time, despite many other scenarios in my life to the contrary. I’ve often told my coaching clients that they always have the opportunity to change the story that they tell themselves about themselves – to rewrite their character descriptions of their life. When I hear someone say “I’m soooo disorganized”, or “I’m addicted to sweets,” or “I'm a magnet for craptastic relationships” … I think to myself “Offfff course you are. Because you tell yourself you are, you find the evidence that supports this and ignore the evidence to the contrary.”

So *cue the life coach moral of the story part*.... maybe it’s time for me to start ignoring the evidence to the contrary – forget the peppers and JV softball. I ran a 10 mile race I didn’t train for WITHOUT quitting. In fact, I bet if I stopped to think of it, there are probably just as many “keep going” scenarios in my life as there are quitting scenarios. Soooo, why not make the choice today to believe that I’m way more mentally tough than I’ve given myself credit for? I just might try that, thanks. Watch out – who knows what this tough chick will do now. 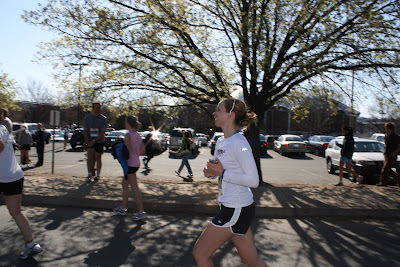