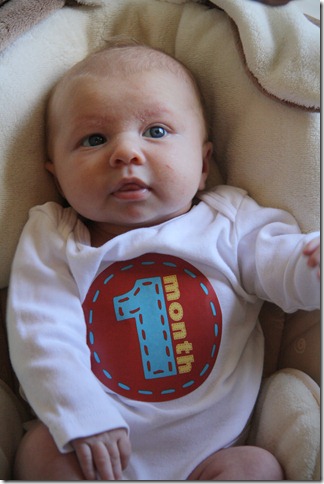 Weight: 10 lbs 3.5 oz  - he was 8lbs 1oz at birth. 50th percentile & just now growing out of newborn clothes and into his 0-3’s. His length is still 21” (same as birth) and according to some app Matt has that predicts height, he’s on track to be in the 6 foot range like his Daddy.

Eats: 3 ounces of formula, 8 times a day. Usually every 3 hours. Gulp gulp gulp. (Last night I timed him – he took down 3 ounces in 6 minutes. And if you dare to make him take a break in the middle, heaven help you!)

Sleeps: In the swing, mostly but will also sleep in his car seat. Wants nothing to do with his pack n play and absolutely hates anytime he lays down flat. (Diaper changes are his most particular favorite time to exercise his lung capacity.) Absolutely must be swaddled, but usually manages to sneak a hand out by the end of the nap. Usually sleeps for 2 hours at a time, but sometimes an hour and sometimes a magical 3 hours. Usually one or two 2-hour day naps and the rest are 1-hour naps.  Usually “goes to bed” around 8:30 or 9:00 and then is up again at 11:00, 2:00, 5:00 and 7:00. We look forward to some of those feedings dropping off sometime soon!

Hair: Still blonde, and a little bit of a mullet in the back. He’s a southern boy though, what can you expect?

Eyes: Still blue! So alert and focuses quickly on anyone who talks to him.

Milestones: Doesn’t mind tummy time and lifts his head frequently and easily. Loves to sit in the babybjorn bouncer and wave his hands and feet and grunt and coo to himself. Can hold on to the wubbanubba (LOVES the wubba) but can’t quite figure out how to get it back in his mouth. Occasionally lucks out and gets a hand in his mouth. More fussy periods as he’s gotten less sleepyheaded, but relatively easy to console with the wubba, swaddle or some bouncing.

Firsts: First outings – we have slowly started to venture out with our little boy and this week we went to Camino’s for breakfast, and visited at Anne & Locke’s and Zac and Jamie’s. He slept through the majority of these adventures. I’ve gotten better at timing errands and feedings after our first massive car meltdown, although he can still throw me off – as he did yesterday, in the waiting room of the doctor’s office by waking up earlier than expected and wanting to eat NOW!! (Luckily, Dr. Kathleen is very understanding of screaming babies.)

Happy one month birthday, Bo! We love you so, so very much. 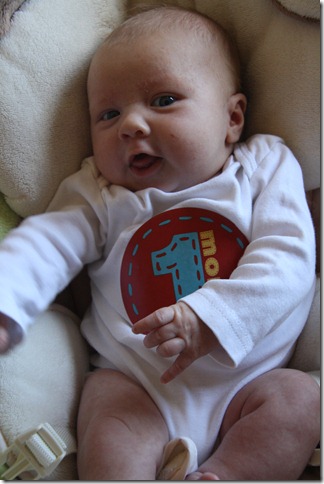 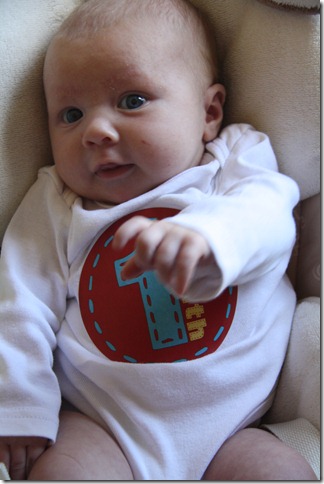 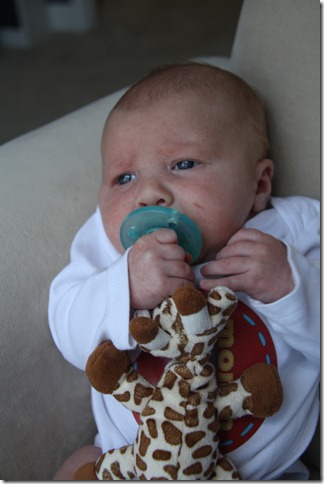 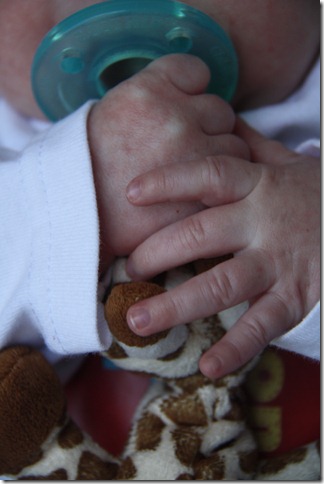 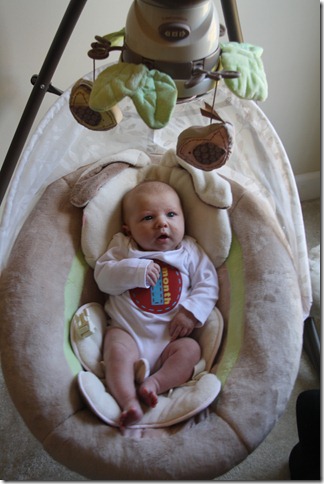 Yes, even when you look like this… we love you, kiddo. 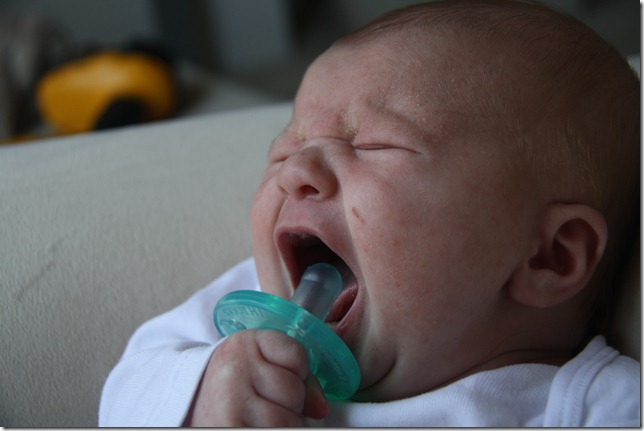