Some days don’t go as planned.

Okay, well, truthfully no days go as planned with a 5 week old because newborns, by definition, don’t follow a plan.

Some days are less predictable than the unpredictable.

I have to say, I think as far as newborn babies go I’ve been spoiled. Yes, I wake up 3-4 times a night. Yup, he fusses and cries when he’s hungry, getting his diaper changed, doesn’t like the onesie I’ve picked out, is being held in a position he finds disagreeable or just because it’s Tuesday. Sure, it’s physically and mentally demanding to be on call to a tiny 10 lb dictator at all times. That’s newborn life. But generally, I think as far as 5 week olds go, he’s pretty good. He’s consolable when he’s upset, he’s got his days and nights straight and he’s stinking adorable. (That last one counts for a lot, y’all.)

We’ve fallen into a nice little rhythm over here over of eat, “play” and sleep with fairly regular naps throughout the day and longer stretches at night. I’m not finishing any novels over here during naptime, but I’m generally finding time to squeeze a shower in or cook the occasional meal.

So of course, I had the audacity yesterday to think “This newborn thing ain’t so bad. We’re figuring this out, me and the little Bo biscuit!”

Today gave me one of those days. The funny thing was it followed one of his best nights of sleep – 2 four stretches in a row! FOUR HOURS. Do you know how awesome it feels to sleep four hours in a row when you’ve been averaging 2-3? Really, really, really awesome.

After a decent morning nap, I loaded him up in the stroller and we set off on a walk. I thought he’d nap while I strolled, but nope… too much to look at! Birds! Trees! Sky! Clouds! Trucks! Mom’s face!

And then… it all went downhill from there. Well – not the walk …that was actually mostly uphill. The day. And naps. Naps went downhill. No nap in the stroller. No nap when we got home. Just … fussing. And then screaming. Screaming! Oh hello, lungs. I’m glad you work.

Eventually I put him in my K’tan carrier and walked around the house doing laundry and dishes and the likes and he fell asleep, and I thought “aha! success!” and I put him in his swing. I crept out of the room with my fingers crossed and waited. Nope. Nothing doing. Wide awake again.

After 3 unsuccessful attempts at napping in his swing (his usual spot), Bo and I laid down on the bed together, both of us exhausted. I sang him a few songs and told him a few stories and was planning to move him to his swing. When I saw his little eyes shut and his body shudder with that last exhausted “I give up” sigh…. I couldn’t bring myself to move him. Asleep! Finally! 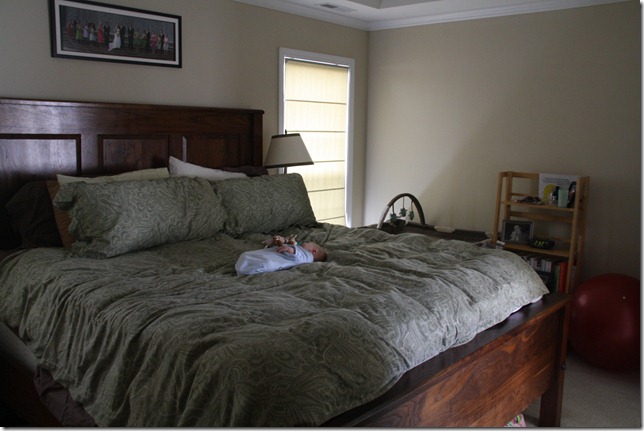 But what if he did? What if I was that mom on the news and they were all “SHE LEFT HIM ALONE ON THE BED TO GO LOAD THE DISHWASHER AND HE ROLLED RIGHT OFF.”

Or what if Buddy jumped up there? (He can’t jump up there.) What if he rolled on his side? (He can’t roll.) WHAT IF THE CEILING FAN FELL ON HIM?

So obviously I had no choice but to spend the remainder of his nap sitting on the bed with him, watching him intently. (I finally slunk off to get my computer and caught up on emails, including an back and forth with friend Kathryn on what topic? Newborn sleep. Oh the irony!) He slept for about an hour and a half, which thankfully reset our day – and his mood.

Some days. Some days you just can’t predict.

It could be worse – we had nowhere to go and nothing to do. I mean, I have things to do – there are bottles to made, laundry to be folded, photos to edit, produce to wash and chop, mail to be sorted, phone calls to be made – but really, nothing that had to be done. Today I had the luxury to sit on my bed and watch my newborn sleep for 90 blissful minutes, even though it wasn’t what I had predicted I would do that day. 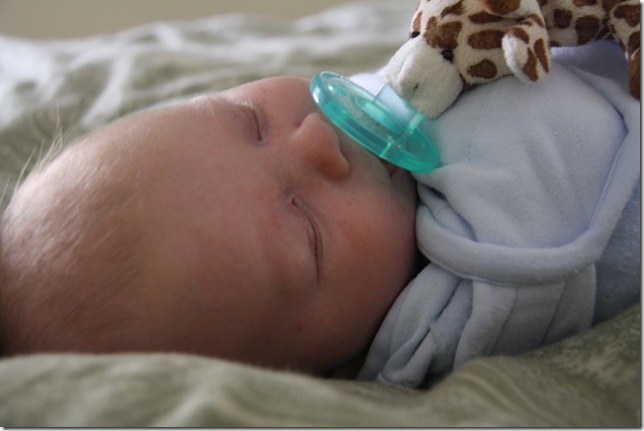 But it’s been a bit of an exhausting day, what with the middle 4-hours trying to cuddle, bounce, shush, sway, rock or soothe a fussface into sleep. Which is why, now that he is down for solid nap #2 (in the swing), instead of making the bottles, folding the laundry, or chopping the produce, I’m drinking a margarita, writing a blog and watching About a Boy. Because some days… some days you just can’t predict how they will go. 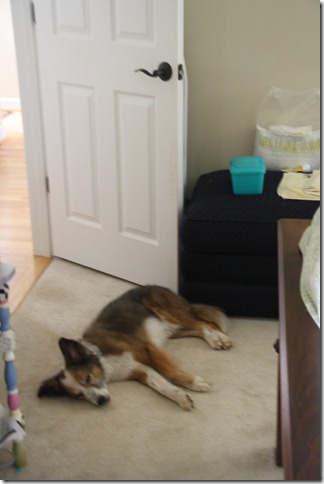 Oh my goodness you made me laugh out loud. He is an adorable little nugget and you are doing a fantastic job! One of my faves:

"Finish each day and be done with it. You have done what you could; some blunders and absurdities have crept in; forget them as soon as you can. Tomorrow is a new day; you shall begin it serenely and with too high a spirit to be encumbered with your old nonsense."
Ralph Waldo Emerson

Some days you gotta just make a marg and be done with it!

I love your baby posts! Congrats on the beautiful baby boy. Love love the name, too.

Oh enjoy it, enjoy every minute of it... I swear (just like everyone else) it goes by too fast! These are the moments you will look back on and think that was so easy, or that was such a short segment of life. Every part is enjoyable, but this little span is the shortest so soak him in. He is precious!!!

You are doing an amazing job! I think you should be proud to be upright most of the time! Move on and keep smiling at that baby boy, he's learning it from somewhere!

I like that Emerson quote, too. One of my favorites.

I also like reading about you as a mama. It's such a SHIFT, really - especially for those of us that love lists. :)

We had so many of those days and 6 months later they still happen. He is such a cutie and lucky to have such a wonderful mommy :)