I love wine.  That’s probably not a surprise.

I also love cupcakes.  That is also probably not a surprise.

So an event that involved both wine and cupcakes?  Not surprisingly, I loved it.

My friend Paul had tweeted me to tell me about this event and I signed up immediately.  I was so excited about it, I almost forgot to check my calendar to see if I could go.  (Luckily, I could.)  And then I talked Teri into going with me.  You can imagine it took a lot of convincing.

It was such a cool event.  Tammy Colson, aka Miss WineOH, runs a blog that reviews wines from all over as well as coordinates events such as the one we attended, where they do unique wine and food pairings.

I’m considering asking her if she needs an intern.

The event was held at City Beverage, where I had actually never been (!!), and it was a cozy, intimate group of 15 people.  Tammy did an amazing job running the event and Spencer from City Beverage was super accommodating.  I was so impressed, and Teri and I both had such a great time.

But you want to know what I ate and drank, right?  Right.

Each of the wines was paired with a cupcake to match it.   Light wines with light cupcakes, heavy wines with heavy cupcakes.  The cupcakes came from a new bakery in Winston-Salem, Camino Bakery, and they were so creative and delicious.  (And thankfully they were mini cupcakes, so you didn’t have a sugar coma if you tried them all!  Which I most definitely did.) 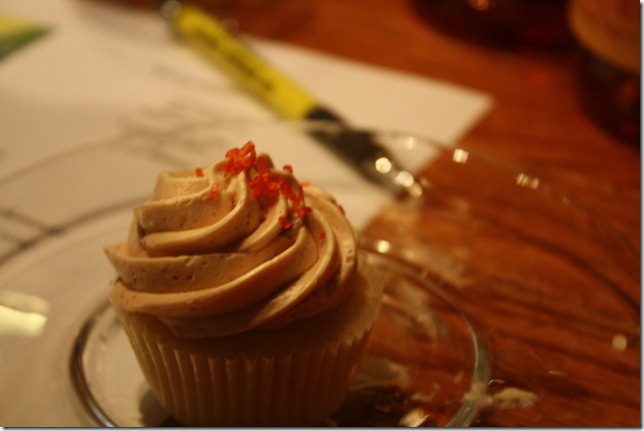 Here’s the actual tasting list from the event, with the wines we had and the cupcakes that matched.  My hands down favorite was the roasted garlic cake with smoked gouda icing matched with the 2009 Dante Pinot Noir.

I know.  I am starting to love red wines.  I don’t even know myself anymore!

And yes, a GARLIC cupcake.  It was delicious – a little smoky and savory, but still a tiny bit sweet.  Perfectly balanced by the wine, which to me was my favorite kind of red – jammy.  I may have brought a souvenir home… 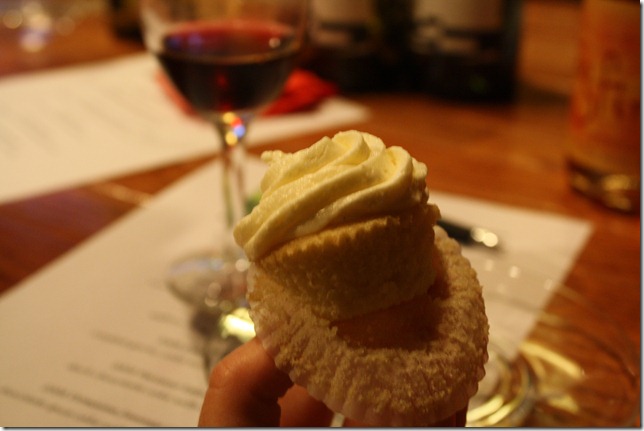 My second favorite cupcake was the saffron cupcake with cardamon icing, especially when I just tasted the cupcake without the icing.  It reminded me of paella, but in cupcake form.  That sounds gross doesn’t it?  It wasn’t.  I liked the wine it was paired with too – it was called Big Fire Rose and it was from Oregon.  It definitely wasn’t like most Roses, and I could imagine eating it with a spicy hot meal on a chilly fall night.  (Or with a saffron cupcake on a chilly fall night.  That worked too.)

My favorite wine was the Pinot Noir, but my second favorite was the 2010 Valdesil Montevo Godello (a Spanish white) paired with a vanilla bean cupcake with strawberry balsamic icing.  It wasn’t my favorite cupcake – nothing about the flavor really jumped out at me – but I loved the wine.  I’m a sucker for anything from Spain, but I can’t say I’ve really had a lot of wine from there!  But Tammy said this wine was a lot like a viognier, which I discovered I love at last year’s Salute festival. 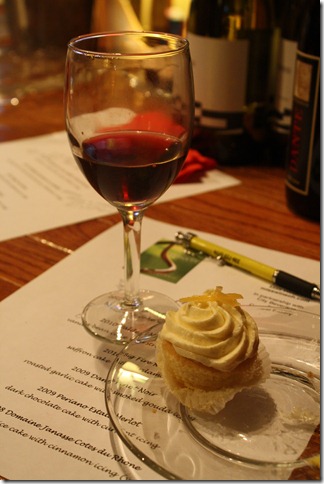 This was such a fun twist on the usual wine-and-cheese pairing idea, and such a neat way to explore new flavors.  Not to mention a great way to spend time with some old friends, new friends and friends who photograph their food too. 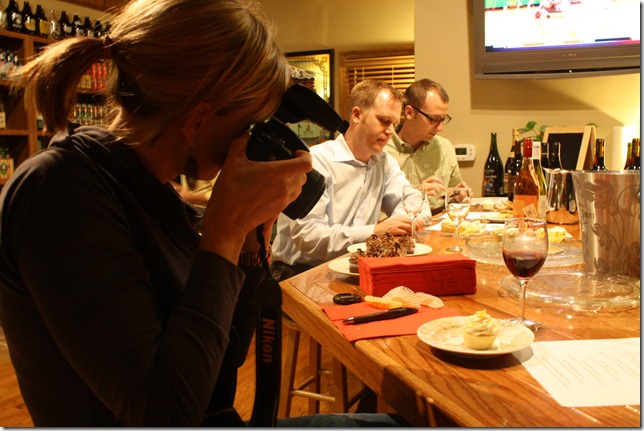 A brilliant idea indeed. So jealous you got to go to this.