Deacs on the Road

I can't believe we took off on another road trip so soon after our last one, but Grandma had so much fun with Bo she just insisted we go away again. I swear.

The idea of traveling up to Charlottesville to watch the Deacs sounded great at the start of the season. It's an easy road trip to a city we both love visiting and a game we were likely to win. However, by the time the game rolled around I think everyone was a little hesitant to put the miles on their car to watch the Deacons play anywhere. It's been a tough season.

Fortunately, Charlottesville is - hands down - one of my favorite places to visit. I never would have known about it if Jess hadn't lived there for so many years, but she introduced us to so many great things about Charlottesville. It has the most amazing restaurants, wonderful vineyards within driving distance and it's really just a beautiful and fun city to visit. (It is also the home of the hardest race I have ever run - the Charlottesville 10 miler. Ugh.) It's a short, easy and scenic drive from Winston-Salem, too. So on Friday afternoon, we kissed the Biscuit good-bye (again) and hit the road with Anne and Locke.

We arrived late Friday night and had a fantastic dinner at Michael's Bistro on the corner. Afterwards we went to a nearby bar to meet up with the rest of our group, but I had learned my lesson in Memphis and called it quits early to take advantage of getting some serious SLEEP.

The game was at noon which meant breakfast tailgate which in Charlottesville means one and only one thing: Bodo's Bagels. We tailgated for a little while before heading into to the game and finding spots on "the hill" to watch. The Deacs actually did win, but it was not what you would call a comfortable win. And this is certainly a team that they should have had a nice, cushiony win. Deacon football can really toy with one's emotions. 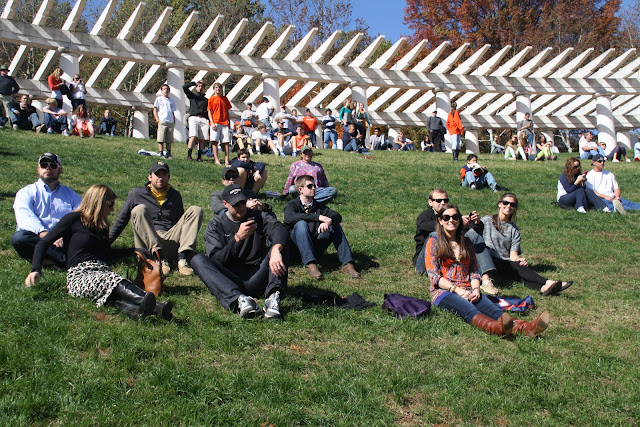 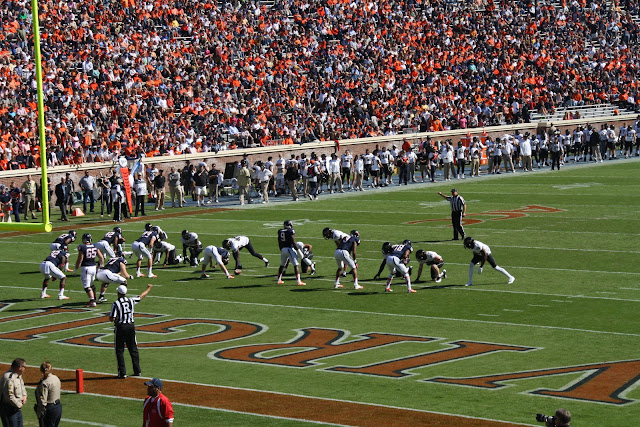 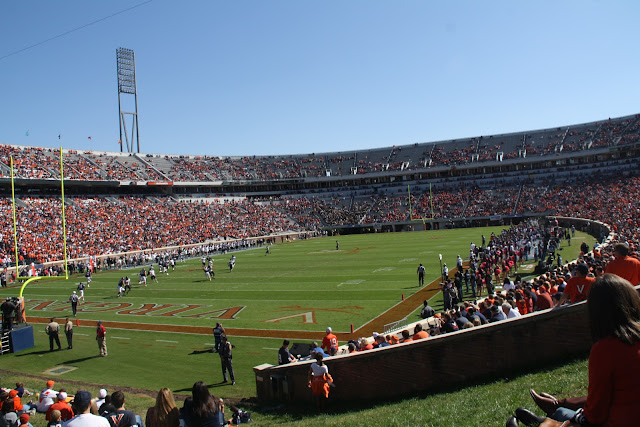 We did win though, and on the road, so we'll take it. After dinner, we went out for some appetizers and happy hour drinks at South Street Brewery before heading over to the mall. (For those who haven't been to Charlottesville, the mall is actually a pedestrian-only brick street of restaurants and stores.) We continued the happy hour at a wine bar called Positively Fourth before heading over to a "burger bar" for a late dinner. Pimiento cheeseburger? You are my best friend.

There was talk of continuing the evening but I reminded myself of my Memphis lessons again and Matt and I packed it in for the night. We had a great time away with friends, but I think we were both so eager to hit the road Sunday morning. We were up, showered and packed before 9 am! It was a fun weekend in a beautiful city and I know we still love to travel, but it is now just as exciting to go back home!
Posted by Meg at 6:28 PM

Sounds like a great weekend! Gotta take advantage of those willing and eager babysitters :)