Dining in the Dash: Mooney’s

Anne & I checked another restaurant off our list of must-try places in our Dining in the Dash project!  I know a lot of people are regulars at Mooney's, but somehow neither of us had ventured down 4th Street to try it yet.  In fact, when I tweeted that I was going at least 3 different people mentioned it was one of their W-S faves (and I even got a recommendation for a dish to try from Miriam.)

I was really happy to see Anne had snagged an outdoor table when I walked up - I love al fresco dining in the summer!  I decided to take Miriam's advice and go with a sampler plate because it seemed like a good way to try out a couple new dishes.  I've eaten a good bit of Mediterranean food but I haven't varied much from a few basic standards that I know I like.  So I decided the falafel as something completely new to me, along with some stand-by favorites like hummus and couscous.  And then I got the cauliflower just because it sounded good.  Anne ordered a moussaka that was a special recommended by the waiter. My biggest problem was narrowing down what to try on my sampler platter - I also really wanted to try the tabouli and baba ghanouj!  Just means I have to go back, right? 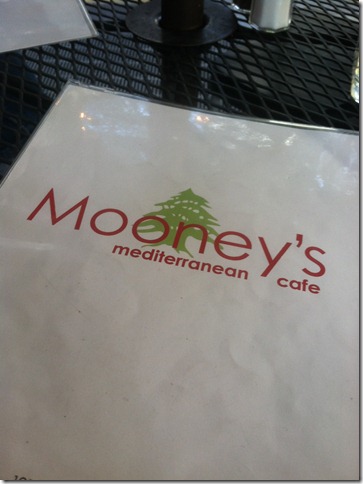 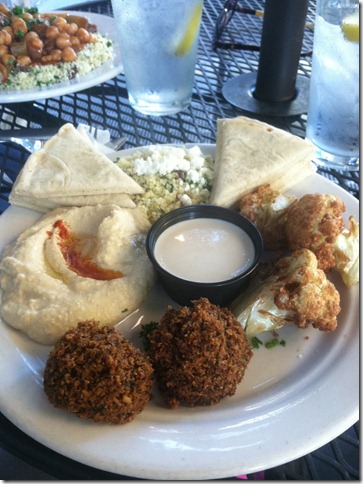 General food review: the hummus was excellent - very creamy and tangy.  I loved the couscous - I forget how much I like couscous because I don't cook it at home very much since Matt doesn't really like it.  I loved the addition of raisins in it for a hint of sweetness.  The fried cauliflower were great too - very light, not breaded or battered and they came with a sesame dressing for dipping.  The only thing I didn't love was my new dish, the falafel.  I didn't dislike it - but I was glad there were only two because I didn't find myself scarfing them down.  I also tried Anne's moussaka (and I'll let her review for herself) but I wasn't a fan - there was a spice in it I couldn't identify but I just didn't love.  Something that made it almost sweet... maybe nutmeg?  (Let the record show that I have no idea what moussaka is supposed to taste like though.)

I also thought it was fairly priced for the amount of food we had.  Our bill was $19 with tip for our 2 dinners (no drinks) and we both had leftovers to take home. One of my favorite things about our meal is that unlike a lot of dining out experiences, I didn't feel like the food was super heavy and I left full but not overstuffed.  While we were eating, Zac came by to pick up dinner there which gave me a lightbulb moment... I have a very small list of places that I like to pick dinner up from on nights I don’t feel like cooking because most take-out options end up being so heavy – I’d rather just eat a bowl of cereal!  So I might not race back here in lieu of some other favorites in restaurant (especially with my long list of places to try still), but there were so many other things on the menu I wanted to try I'm going to keep it in mind as a pick-up option for busy nights too.  I'll just have to remember to leave the couscous off Matt's plate!

A review of our “Dining in the Dash” Project*

*Yes, we added a few to the original list.  And it’s taking us awhile to get to them.  I anticipate this being a long (although enjoyable!) project.

Labels: dining in the dash, food and drink, Winston-Salem

Love your list and so happy that you enjoyed the sampler. You have to try the baba ganoush and tabouli. Let's go to one of the places together!

I think all of this is just a very good idea. Eat, eat, eat! And go out lots & have all sorts of fun! And Mediterranean... it's a favorite of mine (except cauliflower, ick). Yum!

Great review! You did such a thorough job, I'm going to skip mine and combine it with our next one! So now, we need to plan our next one....

And in case anyone wants to know, I loved my moussaka! It was just as good re-heated, too.