I ran a 5k tonight! It was actually the worst race I’ve ever ran!

Well, wait, let me rephrase that.  It was actually the best race I personally have ever run time-wise but the worst course I have ever run.   And that’s saying a lot, because I once ran an extremely miserable run on the Concord motor speedway.

The race was part of Winston’s Rock the Block Fest and was at night.  It was an out and back, and was on a sidewalk.  A gravely, bumpy sidewalk with raised manhole covers.  And cones down the middle to separate the “out” runners from the “back” runners.  There was even one part where race volunteers were yelling at us to single-file.  All 900 of us.

I’m sorry, but WHAT?

The good news is, I was so angry the whole time I was running that I ended up running my PR for a 5k.  I never really set out to run my races at a certain time, because I’ve accepted that when it comes to running I’m pretty darn slow.  In fact, in 10 years of running I’ve never run a 5k in under 35 minutes.

Until now.  And that even includes tripping over a cone around mile 2. 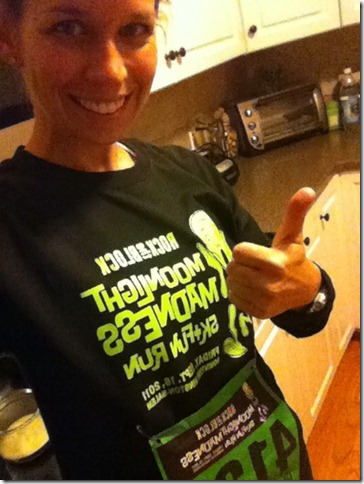 So maybe I’ll have to rethink that slow kid title…

(And yes that is a glow in the dark shirt, thank you for asking.)