I passed this car on the highway the other day. 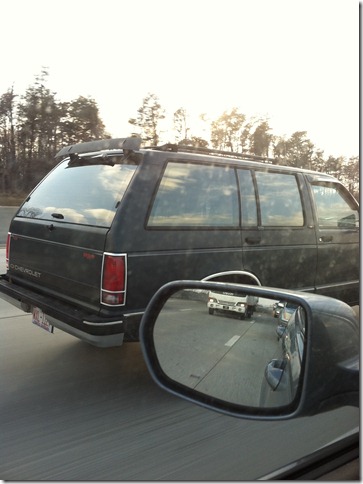 Except that… that’s my car.  My very first car.  The car I took my driver’s test in.  The car I passed my driver’s test in.  The car that I drove to my first real job, at Pontillos.  The car that I drove to my second real job (one week later) at GapKids.  (I didn’t last long in the pizza industry.)  The car I drove my best friends all around Pittsford, blasting Dixie Chicks’ “Wide Open Spaces” feeling as bad-a as can be.  (But driving the speed limit, Mom.  I promise.)  The car I had my first accident in – in my own driveway.  On the day of the PSATs.  The car that had a Smurfette sticker on the back window and a pink leopard print steering wheel cover.  (Yup.)

All of a sudden, I get why the 50-something buys the 1970s pick-up truck or Ford mustang convertible.  It’s not that I want that car back again.  (Ok, I sorta do, I teeny tiny bit).  It’s just that something – experiencing, for the first time, the momentous emotions of independence, confidence and the world-is-my-oyster feelings that the first hunk of steel provides.  After a few years, driving is just driving.  You put the A/C on instead of rolling down the windows, and you set the cruise control instead of feeling the gas pedal rev under your foot.  You cease to appreciate the power of being able to go anywhere simply because of all the places you have to go.  Sigh.   Being 16 is wasted on 16 year olds.

M, you're such a good writer.