When my Grandma was in the nursing home, my Grandpa used to drive up to see her twice a day.  I imagine that he knew the route with his eyes closed and he counted off the hours in the day to first visit, then second visit.  We all worried about the toll it was taking on him - at this point, she was suffering from Alzheimer's and had various degrees of awareness of why she was there and not at home, or when she could go home, or even who he was.

Can you imagine visiting your wife twice a day and often having to tell her, twice a day, that no, I'm sorry... I can't take you home with me?

At one point, my mom asked my Grandpa if he wanted to go with her to Florida and take a break and go golfing.  She wanted him to have some "me-time", to do something he absolutely loved doing.  My Grandma was in good hands - my mom is one of 4, and everyone was ready to be all hands on deck.  I was in college when my mom told me this story and his response has been burned on my heart ever since.  She asked him to go to Florida, and he said:

When my Grandma passed away in March of 2005, we all wondered how my Grandpa would fare.  He was healthy, independent, mobile and totally with it - not something all 84 years old can claim.  But we knew he would have traded all of that just to go home with Grandma.

My Grandpa stayed in good health for most of the last 6 years.  Until about 14 months ago, he still lived in his house, drove his car, and some days even still visited the nursing home my Grandma had spent her final years in.  It wasn’t until he had a heart attack in January of 2010 that he showed any signs of his physical body catching up to his calendar years.

On a Rochester-cold December day, in 2009, I met him for a breakfast date at Denny’s.  I had driven down to Geneseo to meet him, the half way point between my parent's house in Pittsford and his house in Fillmore.  He drank an endless cup of black coffee and ate half of an English muffin, I downed a diet coke and some scrambled eggs.

"How did you meet Grandma?" I asked.  I don’t remember what we had been talking about before then, but I wanted to ask that question and the moment was right.

Quite some time passed while story after story fell out of his mouth and he alternated peering into his coffee cup or staring off into the distance - watching the movie unfold in his head as if it was yesterday, and giving me the play by play.  He told me how they met, about their courtship and of course, his proposal.  He shared stories of how once they were married, she was always late to meet him anywhere because she’d stop to talk to someone in the grocery store or church parking lot and lose track of time as she would slowly unfold a stranger’s life story.  “What took you so long?” he would ask her, knowing what the answer was.

After about an hour, he realized where he was and looked at me with an almost bashful look to him.  "How did you get me talking about this?" he asked, a little embarrassed and a little bit wistful..  My heart was full with stories, and I knew I couldn't press my luck any farther so I just grinned and shrugged.  I tried to steal the check from him (he wouldn't let me) and hugged him hard in the parking lot and told him to drive the speed limit.

He chuckled to himself as he got in the car, which I knew meant he would not.

I have so many precious memories of my Grandpa, but this is the one that I have played over and over to myself in the last few days since my mom called me with the news.

I think of that wistful look he had in his eyes as he recounted to me seeing my Grandma for the first time  and I can only imagine that they're exchanging those glances again as if it was their first time seeing one another.  Their marriage was what every good marriage should be – a friendship, an equal partnership (a rarity in the 1950s), and genuine, sincere love for one another.

I feel sad for myself, that I’ll never get to hug him and feel his scratchy beard on my check, or listen to a voice mail where he tells me to say hello to “that good Methodist boy you married” or see him flipping pancakes on the Coleman stove of their Airstream trailer.  I am sad that my brother won’t have anyone to give a carton of Whoppers to at Christmas for the first time in 33 years.  That my sister won’t get to have him proudly walk down the aisle at her wedding, shaking hands with people as if he was a celebrity. That he won’t see my 4 cousins graduate college, get married and turn into the amazing grown ups they are already becoming.  I am sad that my mom, her sister and her 2 brothers have lost their Dad, a sadness I can’t even really permit myself to imagine.

But after I wade through this sorrow, there’s an incredible sense of peace and overwhelming happiness because I know my Grandpa is exactly where he wants to be: home, with my Grandma.

And imagine the first thing she will say to him is, “What took you so long?” 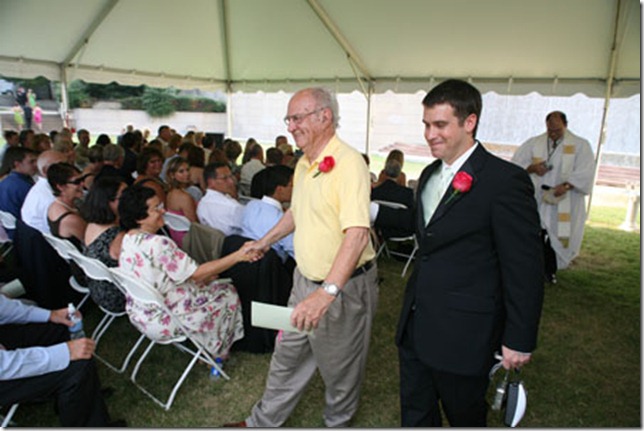 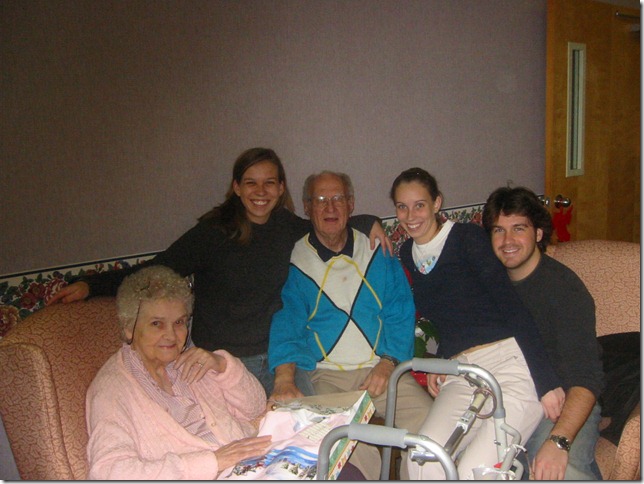 Well, I just cried on a Monday morning at work and got busted by a co-worker. I could attribute it to moving across the country on Thursday but really I just love all grandparents and you, especially. I'm so glad you had that special moment with your Grandpa and that those two cuties will be reunited at last. Thinking of you and your family, but happy about a long life well-lived. Xo, Kris

Oh Megs. I read this as I was nursing Quinn, so I suppose the hormones were already flowing (um, literally? sorry), but I just cried when I read this. One of the most beautiful things you've ever written I think, & your Grandpa is probably just pleased as punch to have you as his granddaughter. And to be back with his love! Death is sometimes selfishly a very sad thing (because we don't get them anymore, for the time being), but I'm positive he is just so happy.

Hugs to you, friend.

What a beautiful love story those two have. I'm so sorry you lost your grandfather, but how sweet that he's peaceful with his love now.

Ditto to all previous comments (well, I'm not breastfeeding, so not that one).