I dun no whud she do wit her chicken tetrazzini….

I’m gonna go ahead and apologize, because I have yet another recipe that triggers an immediate inside joke… ‘cept this one is between me and anyone who watched the soup in 2010.  If you’re one of those people, I’m willing to guess you couldn’t help but hear this in your head when you read this title:

I’m not going to link the longer clip (just look up “chicken tetrazzini” on youtube if you’d like), but be warned it’s NSFW.  Or children.  Or your sanity.

So, where were we?  Oh yes, chicken… chicken tetrazzini.  Despite the fact that The Soup has pretty much made this dish a joke in our household, it is DELICIOUS.  And it’s easy to make ahead of time, freezes nicely and travels well.  The recipe came from Wino Emily and she’s made it for us on many occasions.  When I was getting married, I had a kitchen/recipe shower and this was the recipe she gave me.

It makes a lot – you could do either one big lasagna dish or 2 small 9x9 dishes.  I did 2 small ones, so we could eat one and give one away.  I again used my big serving of pre-cooked shredded chicken for this one. 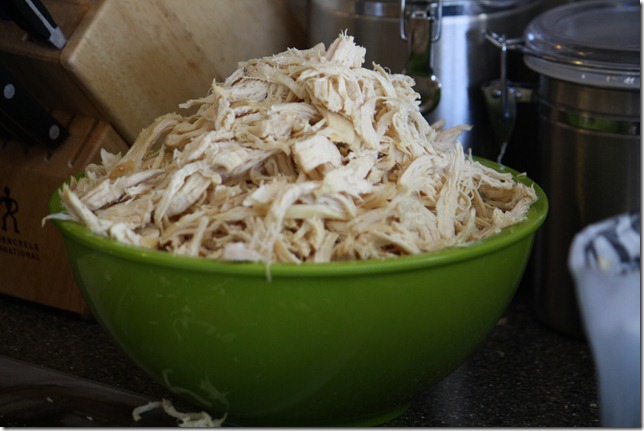 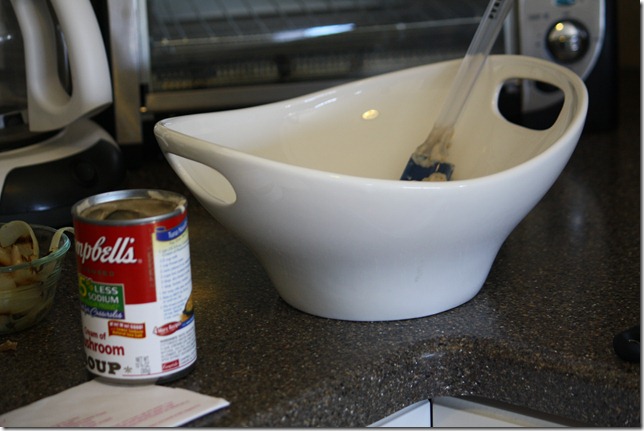 1. Cook and shred chicken.
2. Cook noodles according to box's directions.
3. Mix soups, sour cream, and salt and pepper.
4. Saute onion and green peppers.  Add mushrooms.
5. Add noodles to soup mixture.  Stir/toss (it will be very thick.)  Add sauteed veggies and chicken.  Pimientos are added last so they don't color the sauce.
6. Place in a greased dish.  Top with cheese.
7. Bake uncovered at 350 for 1 hour or freeze uncooked to be baked later.

I actually made a double batch to have some more for our freezer, and it was so big I had to get out my giant salad bowl to mix it in. 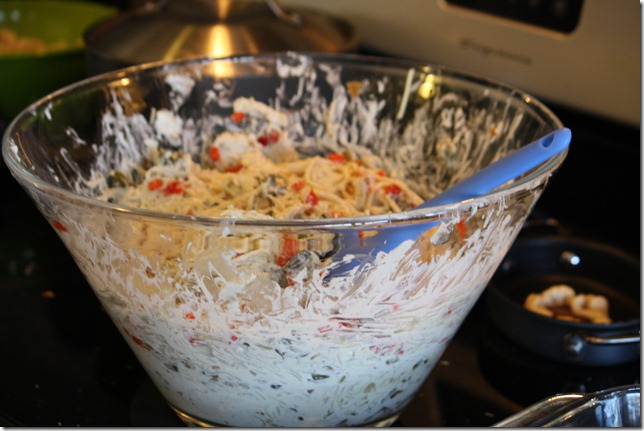 Unless you’re feeding a crowd, you don’t have to double it.  We’ve got chicken tetrazzini to spare.  (Luckily, it freezes beautifully!)

I forgot to take a finished product picture, but to be honest – it’s not the prettiest dish.  You’re just going to have to trust me that it's a crowd pleaser and easy to boot.  It’s obviously a pretty calorie dense meal, but a small serving goes a long way.  Pair it with a simple side salad, and you’ve got dinner – for a few nights or for a big group.

Or, to seduce your best friend’s boyfriend.

The next few day’s posts will be featured in one post at the end of the week explaining how I cooked *all* these meals in one day.  Yea, I’m superwoman.  No big deal.