She Writes Her Name

On a wall in my living room hangs a rural scene
A structure so sturdy in a field so serene
The brush stroke that rendered the settings precise
Its value incomparable to any asking price
I imagine the artist as she selected the frame
And in the lower right corner, she signed her name

A painter, a quilter, a gardener and cook
Her talents have always demanded a look
But her greatest creation hangs not on a wall
Nor covers a bed or grows in soil so tall
Its cultivation took years and hard work and love
And support of someone who smiles down from above

Her masterpiece can't be seen, touched nor heard
Its description requires more than a word
There are seven in fact that she gave herself to
Gave love and belief in all that they do
That first clan has flourished to nine and twenty
From New York to Georgia, love and laughter are plenty

The artist's hand, both gentle and sure
Has created a piece that through time will endure
I imagine the artist as upon us she gazes
I wonder if she will ever fully hear all our praises
Just like her name on that lower right side
Her name and her touch we all carry with pride

My Grandma was, as my Aunt Patty put it, the original superwoman. She had 5 kids by the time she was 25, and added two more to the clan a few years later. She could do anything around the house, and she was creatively talented as well. She could paint a masterpiece inspired by a pot of flowers sitting on her kitchen table while a carrot cake from scratch baked in the oven, and finish it off by hand stitching a quilt for someone's Christmas gift. We ran into one of her best friends at the grocery store today, and woman who had known her for more than 60 years, and she told us that she used to iron diapers. I'm honestly not surprised.

My Grandma was a fiercely independent and extraordinary competent, but she wasn't what you would call a "warm and fuzzy" woman. In fact, my siblings and I often quote one of her most famous lines spoken to my brother one Christmas a few years ago when the cousins took over cooking. "Michael, this bruschetta is terrible."

You could trust Grandma to always tell it like it is, like it or not. She may not have always been right, but I can assure you, she was never wrong. Her love was not doled regularly in platitudes, but measured in acts of service - a pot roast delivered to your fridge, a hand painted Christmas card, a made from scratch Boston Creme pie every birthday, a washer and dryer found for a struggling young mother. Grandma's love language was doing, and if you were listening for that, she never stop speaking it.

When I had been out running on Monday, I saw a shooting star drop from the sky. I literally stopped in my tracks and said "Buddy, LOOK!" (He didn't, of course, as he was much more interested in dislocating my shoulder in an attempt to sniff a nearby tree.) I'd never seen one before and I was awestruck for a second at how bright it burned, yet fell so quickly and disappeared. Once it was gone, there was no physical evidence that indicated it's path - just my memory of it.

When we gathered on Saturday to say our good-byes and remember her life, I think we all felt a bit like I had felt on that street corner Monday morning.

Gone are any physical reminders of the path of this fiery, bright life. Now we stand together, a bit bewildered, reminding one another of all the memories that we collectively share that prove that she was there, she touched each one of us, she burned a path through this Universe.

Goodbye, Grandma. We will miss you, and your love will burn brightly in our hearts. 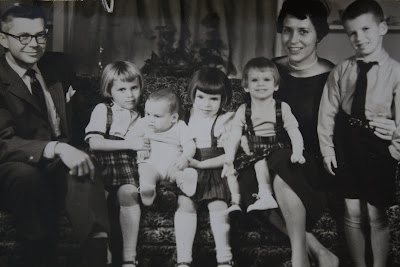 I'm so sorry about the loss of your grandmother. She sounds like a really incredible lady.

Praying for you and your Meg!