Back Where I Come From

Growing up, my mom always made corned beef & cabbage on St. Patrick’s Day. I guess I’ve never asked, but I’m assuming she started doing it for my Dad, whose father is Irish. (Although, from what I’ve heard about my Grandma Swales, my mom’s mom, boiling everything in one big pot would have been right up her alley when it comes to cooking!)

This was my first time attempting to cook it myself, and I was pretty pleased with the results. (I actually made this on Sunday, but it seems appropriate to post it today.) Then again, you basically just continually add things to boiling water: meat first, then potatoes, then cabbage. Making the sauce involves stirring and microwaving. It’s pretty much a no-fail, and it goes a long way. Definitely can see why my Grandma Claffey (my Dad’s mom) would have been a fan of this, since she was tasked with the challenge of cooking for nine every night!

I could hear her voice while I was cooking, with one of her most famous quotes:

“If potatoes weren’t so common, they would be a delicacy!” 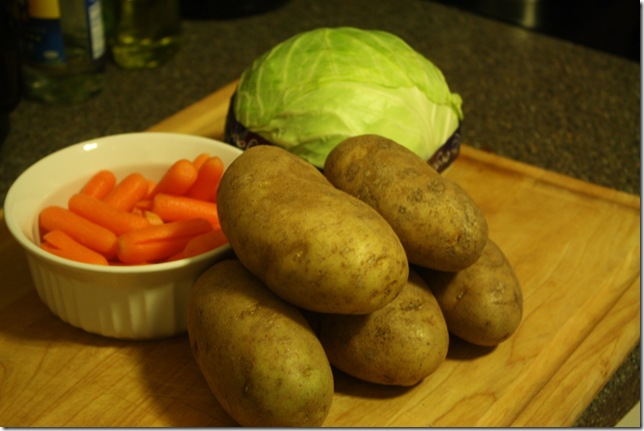 I guess this should go on my cooking blog, but then again, it’s not the healthiest meal I’ve ever made, so between you and me, let's just agree to leave it here. 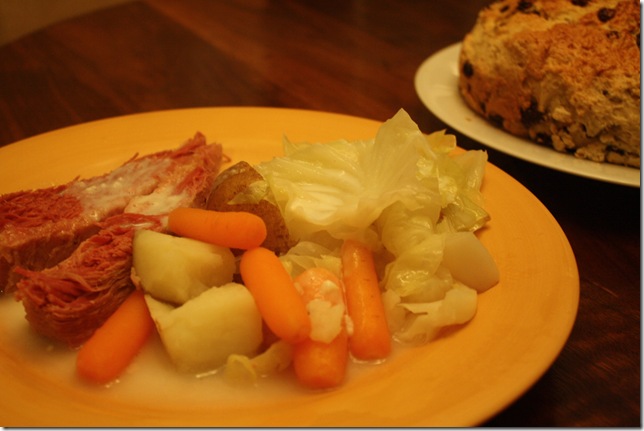 Did I mention soda bread? Mmmm, soda bread. We’ve been eating this for almost a week now. 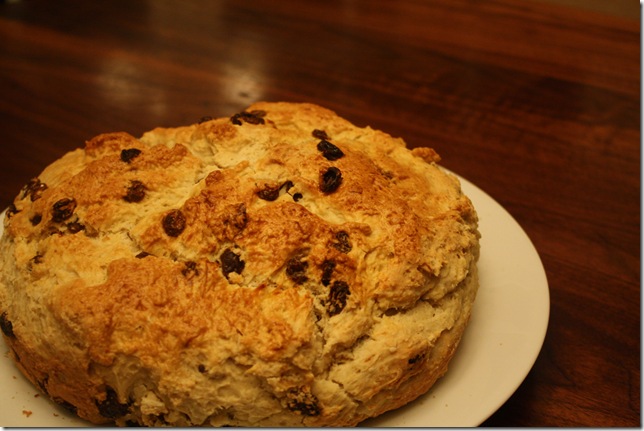 I love being Irish. Growing up in the North I experienced a big focus on “where your family comes from.” Maybe it’s because the northern states were “melting pots” much more than the South, but I’ve not come across this same fascination with the place of origin in the South. Here, when you ask someone where they are from, they are likely to tell you which county their relatives have lived in for the last 100 years! That kind of longevity of place is a bit of a novel concept for most Northerners.

In 3rd grade, we had to make cut out paper dolls to represent our family's country of origin. I specifically remember using an excessive amount of red yarn for hair, and plenty of freckles. In 4th grade, we had to interview an older relative about their relatives - during this project I learned my great aunt was supposed to come over to America on the Titanic but fortuitously fell ill and couldn't make the departure! In 5th grade, we had Immigration Day in elementary school. We had to dress up from whatever country our ancestors had come from, and if I recall right, there was a pretend Ellis Island type experience and a swearing-in assembly. Oh, us melting pot of Western European suburban kids!

I was very conflicted as to whether to represent my Swedish ancestors (Mom’s side) or my Irish ancestors (Dad’s side.) In the end, I choose Swedish for one simple reason: I was blonde.

Other than our somewhat odd fascination with immigration projects from 3rd grade to 5th grade, I haven’t dabbled much in my family’s roots. My brother spent sometime in college tracing my Dad’s line back to Ireland, and my mother’s father has a great record of his family dating back to England. The first time I learned that my Grandma Swales (Mom’s side) had descended from Swedish missionaries who had lived in Venezuela was at her funeral!

As I grow older, I find myself being tugged back towards my roots. I know very little about my family beyond my grandparents – which is the complete opposite of my “100 years in one county” husband who can tell tales of a great-great uncle who was a physician who traveled on horseback throughout Lincoln County and a great-great grandfather who was a pilot. It wasn’t until about a year ago, when putting together a family tree in my wedding scrapbook, that I learned that my sister’s name – Kathryn – was my great-grandmother’s name.

I know that, strangely enough, this is some of my reason for blogging. Ever since learning my great-grandmother’s name, I’ve wondered who she was. At 27, what was she doing? What did she think? My mom has recently found and shared some writing from my Grandma (her Mom) and there’s something that seems magical about hearing the voice of the people who came before you. Especially, in the case of my Grandma, hearing her voice as a wife and a mother, before she played the only role I knew her as – grandmother. I blog for myself, to shake the voices and stories out of my head, to supplement my not-so-trusty memory, but also to put my voice out there for my someday children or their children to read and know who I was, before I play the only roles they will know me in. Isn’t that the fascinating thing about people? We play so many roles in our lives, yet we generally only know each other in one or two of them.

Maybe it’s the process of beginning to start a new branch of a family tree – getting married, the joining together of two families – that makes the desire to know more about where you come from grow stronger. Maybe it’s totally random. What do you think? Do you know much about your family line? Have you ever been curious to know more? Where would you start, if you wanted to know?

Who knew a blog on boiled cabbage was going to end up being a soliloquy on immortalizing my own voice? I think I forgot to mention another reason I blog: it turns out I can, and will, talk about anything I want.

Happy St. Patrick’s Day, from a 25% 5th-Generation Proud to Be Irish Woman. Although, you should know, that’s just one of my roles.

Meg! Great-grandmother Claffey's first name was Katharine--she went by the name Kit--Grandpa Michael said she had "great gams" (nice legs)when he saw her riding a bike....I think her middle name was Anne, but I'm not positive. She was a Wimble (from the Wimbles of England)...they were both only 1st generation here, so my father is only 2nd generation, and I (and your dad) only 3rd...but on Mom's side--we go way, way back to the famous Loomis gang--a group of horsethieves...oops--there's even a book about them--in upstate NY...On Grandma's side--they go back way over 100 years...trust me, honey-bug. Dad's side--we're half English, half Irish...

Haha, see I don't have ANY of my facts straight!
Although I think I recall that maybe her middle name as Frances? Does that sound right?
I may have to cozy up with a notepad and get you to spill what you know, so I can keep it all straight for once.
Horsethieves?

That corned beef & cabbage looks delish. That was always one of my favorite meals my dad made when I was a kid, partly because I love a good spicy mustard on the CB... Not to mention cooked onions & carrots are a hell of a 1-2 combo.

It may not be heart-healthy, but it sure is happy-healthy!

I loved Immigration Day! Probably a tie with Homespun Day. My dad's cousin does lots of geneology research and my brother and I love the stories. It really is fascinating!