I've been feeling really frustrated and glum about the whole Buddy-crate system (see: past entries, react: no DUH). But I got to thinking yesterday, about how much I talk to my clients about energy and expectations, and how often what you think you're going to get is what you get, for better or for worse. Then, last night I was reading Cesar Milan's "Cesar Way" passed on to me from the lovely doggy-veteran momma Jamie, and I realized with a start that Cesar is a big-time subscriber to all these universal concepts that coaches love. He even cited some of MY role models, including Wayne Dwyer, Deepak Chopra and Dr. Phil. I was all okay Megs, let's put your coaching hat on and get out of your own way. YOU CAN DO THEES. 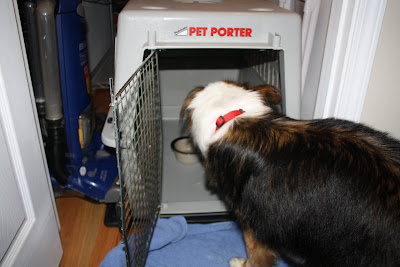 I don't know... I don't think I wanna...
Regardless of whether or not we're seeing progress I have also simultaneously declared myself on a Venting Fast for 1 week, based on a cranky, complaintfest I had on Friday and how ugly I felt about it. I'm choosing not to complain OUT LOUD for one whole week (mark my words and feel free to hold me too it) and if I MUST let out some steam, I'm going to try and keep it to written word. To myself. (Possibly to be posted later should they be entertaining.)

So let me tell you about my day with Buddy and you can help me decide whether or not he's progressing. And I apologize for the current theme of this blog of late, but hey if mommybloggers are such a force to be reckoned with, why not doggybloggers? (Are you listening, PetSmart? I will happily put an ad upon the side of this blog in exchange for compensation in the form of monies and/or lifetime supply of puparonis.)

One thing the Doggy Behaviorist guy recommended was that we move Buddy's crate into our living room and that we spend some time with him in it while we were in the room. I guess the idea here was to start to diminish the association between crate = GONE GONE OMG THEY'RE ALL GONE MELTDOWN that seemed to occur everytime the latch on that crate swung shut.

The other thing I learned from my Cesar reading was that wearing your dog out, then feeding him was the key to getting him sleepy enough to chill out in the crate (or left out.) If you saw my dog shakin like a polaroid picture, you'd know that I've pretty much research separation anxiety up and down, and this is like tip numero uno. So I've definitely attempted to employ this strategy. However, my version of a walk was a 10-15 minute stroll that ended pretty much as soon as bodily functions were taken care of.

Today, I have walked/run 14,915 steps. THAT'S SEVEN MILES, PEOPLE. (In other news: that's seven hundred extra calories which I intend to make up in these here tall glass of vino. Thank you furry personal trainer.)

After our first 3 mile walk, we worked on small periods in the crate. I started with ten, then twenty, then thirty, then fourty-five with anywhere from fifteen to thirty minutes in between each session. I mostly stayed in his view, and corrected him anytime he started to whine or paw the crate door. He actually laid down for the FIRST time ever in his crate. This is big. Although the panting/shaking did indicate he wasn't exactly relaxed.

Since the trainer did recommend that Buddy get him some Xanax or the like, I thought maybe tonight I'd try some Benadryl. (Don't worry, I made Dr. C google the appropriate dosage amount. I didn't want to try and do CPR after he'd been drooling in his crate.) After an afternoon of crate training, I took B to work where we took a mile walk around campus and then he passed out on my office floor. After a few hours, we packed up and came home. Another 2 mile walk, and I slipped him the Benny in some peanut butter.

As I write this, he's been in the crate for 20 minutes. He's laying down, but still shaking and panting. Not entirely sure the Benny has had any effect. In fact, I think he could still operate heavy machinery. (Me on the other hand, I'm buzzed from 4 sips of Pinot. Maybe Buddy prefers his drugs in liquid form? I'M KIDDING, PETA.)

Is it progress? Maybe. He's in his crate without any of the usual behaviors: whining, drooling, BARKING, or peeing. He is panting, but he's laying down. And truth be told, he's still shaking.

But, it's still early. I'm choosing to believe that this dog can be rehabbed. If not, well, no loss. I paid for the Benadryl out of my FSA. 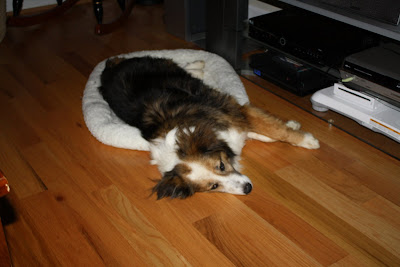 Goal: Achieve this mental state,
but within crate so as to ensure safety of curtains and/or dry-wall.
Posted by Meg at 4:06 PM

I am SOOO proud of you... and Buddy!!! I think seeing him "relaxed" in his crate is excellent progress. Even though he was still experiencing some anxiety at least he felt comfortable enough (or tired enough) to lay down. He's getting there... hang in there mom!

baby steps, meggo! the living room tip is a GREAT one. count this as several positive, tiny steps forward. be ready for a backwards step or two, and like with your weight loss clients, know the net gain (or loss of anxiety) is positive. you can do it :)

It's definite progress. As long as he can see you, he should act a lot different. I had to bring Duke to my bedroom and crate him, when going to bed, so he wouldn't whine and carry on...it worked. Keep up the good work. It'll pay off in the end. It has to...or your going to be the one needing Xanax! Ha! Love ya.