Stats: 28.5 lbs, 31 inches. Still wearing 12-18/18-24 months although the pants don’t have to be rolled anymore - sometimes I have to yank them up as his little baby belly has started to disappear as he gets busier and busier!

Eats: Just about everything? His favorites are still yogurt, waffles, turkey meatballs, corn, strawberries, watermelon, grapes, edadmames, peanut butter, raisins. He calls every meal a snack - pronounced “snock” and asks for “a couple ya-ya’s (cheerios) and raisins” at every meal.

Sleeps: Mostly 7pm-7am or bedtime has crept up to 8 sometimes recently… and it’s about 50/50 if he’ll sleep in til 8. Naps 12:00-1:30/2:00 so we’ve gotten the nap a little later in the afternoon. All he needs to go to sleep are puppy blanket, puppy and ee ee. He finishes the song I’ve been singing him since he was a baby (Powder Blue) and then yells BYE BYE to me. Occasionally he’ll ask to “rock rock” and I always oblige - it’s so rare that he wants to cuddle and I can’t pass up the opportunity.

Milestones: Huge improvements with toe-walking. His physical therapy has gone well and he’s mostly flat-footed now, with occasional tiptoes. He still wears the brace at night and naps to keep his ankle stretched but he can now squat, balance and crawl up stairs with much greater ease. He’s starting to do the stairs with railings but still gets a little timid about that. He kicks a soccer ball, throws and loves climbing on the playground. He talks NONSTOP. So much talking. I love his sweet voice. He can count to to ten and sing most of the ABC’s - still called the “ahh-bee-cee’s.” He dances and sings whenever music is on and can name an astounding number of songs within the first few notes. He’s just started to run, and I love the way it looks like his top half of his body is disconnected from the bottom half.

Loves: All trucks and anything with wheels. Everything is a car and he finds roads everywhere - the edge of his plate, mommy’s leg, the top of a table. He loves books and will happily go through every one of his bookshelf. Top favorites right now are the Pookie books (Sandra Boynton), Go Dog Go, the “Digger book”, the “Chuggy truck book,” the “happy baby book” and an ABC’s book. Waffles, muffins, yogurt, raisins. Zoey and Eli and going to the Y. Saying hello to everyone. Playing on the porch (“pooch”) and in the grass (“gas”) and blowing bubbles. Going to the playground (“pee-gound.”) Belly raspberries. Wheels on the Bus and the Muffin Man. Coloring. Particularly with purple crayons. Watching videos of himself on my phone. Playing “out-tide.”

Challenges: Enforcing the rule that I have to carry him across the parking lot of the Y. There’s usually screaming. Or basically anytime he wants to walk/run, and I have to pick him up to get him somewhere. It can take us a good ten minutes to get up the stairs sometimes, and if I finally just scoop him up to carry him up there: the world has ended. Whining. There’s definitely a whining stage happening right now. Not over anything in particular, more just like anything he requests seems to come out in a high-pitched voice that would send dogs running. Random meltdowns. Fortunately, he’s definitely improved with the hitting - whether he’s just moved on or actually listened to us is debated. He does walk around the house saying “no hitting Bo” so at least I know he’s heard us… We’re also getting slightly better with dinner times, or at least, it’s warm enough outside where he can go play on the porch when I cook. I’m amazed at how just playing outside in general - at any point during the day - seems to do wonders for this kid’s mood. We couldn’t be more ready for spring to be here. We’ve had my mom here a lot these last 3 months since they bought a house in Winston (!!!!!!) so I’m not entirely sure if there have been less challenges in general or if I’ve just been able to have more breaks and don’t feel as overwhelmed as I did at 18 months.

Somewhere along the line, my little baby disappeared and this little boy showed up. All of a sudden, I have a house full of cars and tractors and soccer balls and golf clubs and I roll my window down whenever I pass a fire engine so he can hear the siren. We have so much fun with this little boy. He is curious and playful and social and loving. He is a good little boy, and knows what the boundaries are - and tests them within the appropriateness of a toddler, of course. He has the sweetest demeanor and loves to give his friends hugs and kisses. He and Zoey leave the Y daycare holding hands and walk all the way out to our cars like this every time. He is so social, and I swear our days are better when we get out and about at least once. (Sometimes a challenge for his introverted, homebody mama - but fortunately, even a trip to Target can act as a happy hour to this kid who just wants to SEE people and interact.) I can’t believe we’re closer to 2 than we are to 1 now - I don’t know where this last year has gone. The rare moments when he asks to rock rock and will curl up into my chest, I just try to freeze time and preserve the memory of those 29 lbs curled up in my lap (barely fitting) and the soft feel of his little blonde head under my chin. I remember myself, in those moments when he’s whining hard because I won’t let him watch “baby videos” on my phone, that these moments won’t keep and one day I will yearn for the sound of that tiny voice asking for another round of wheels on the bus. 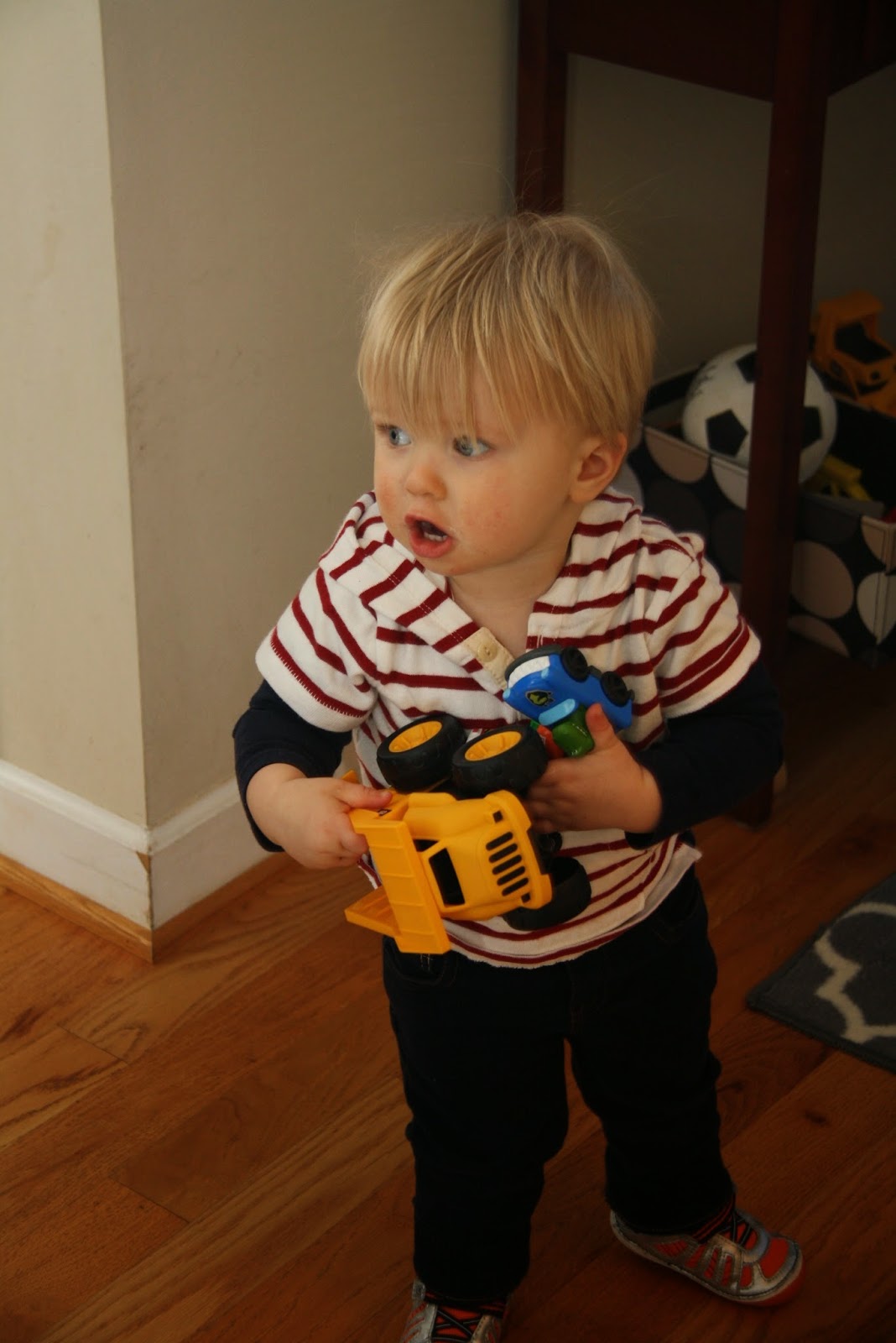 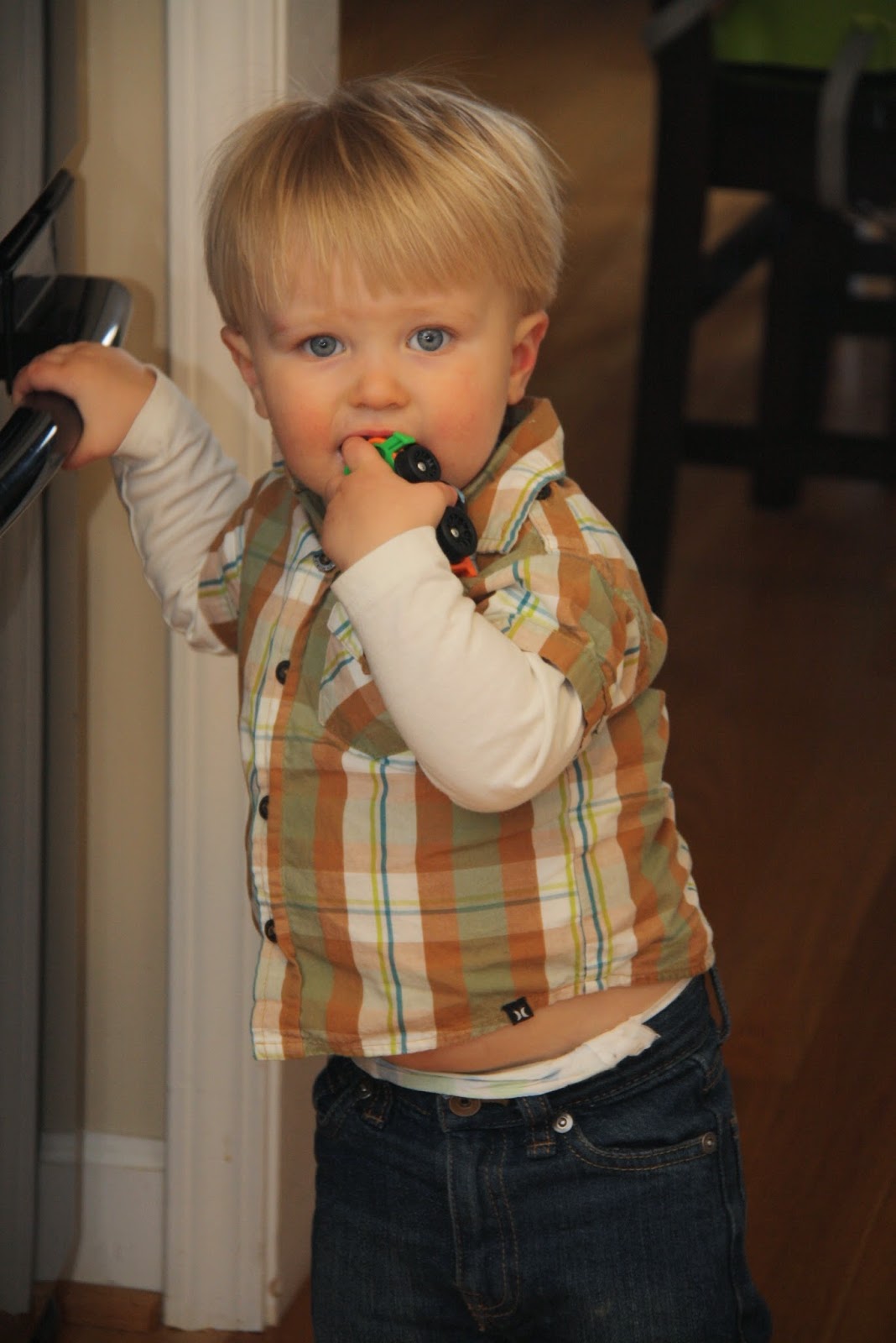 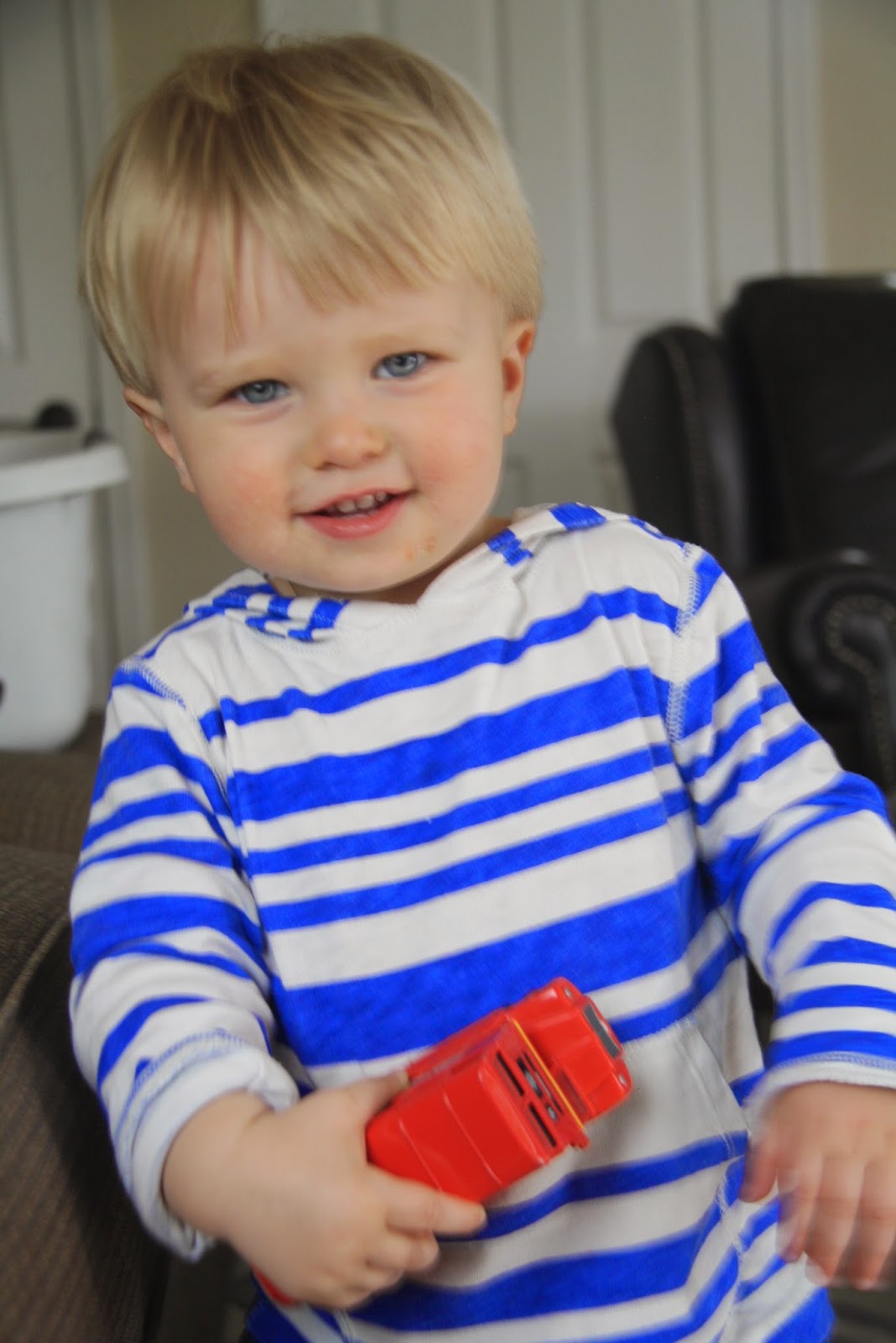 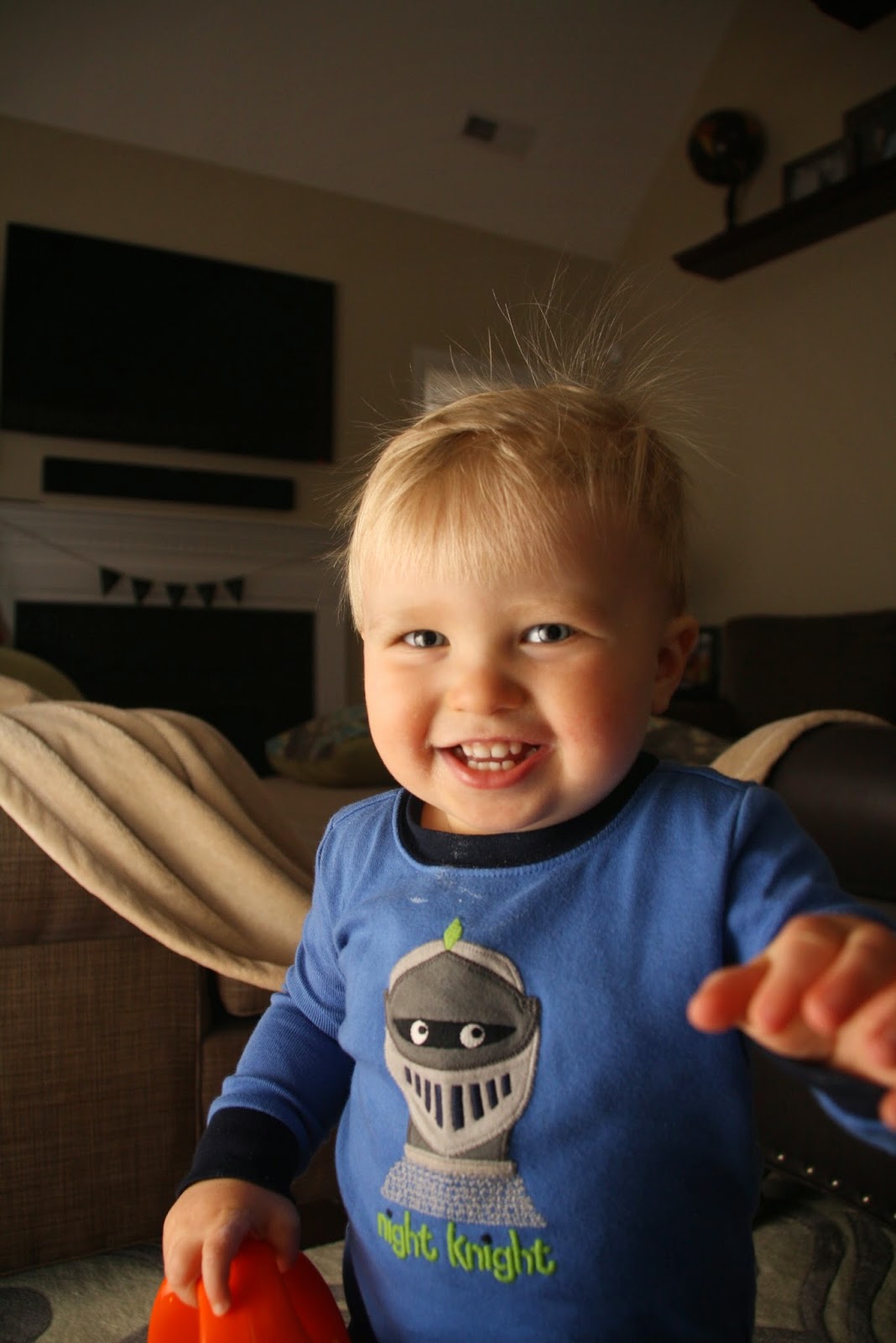 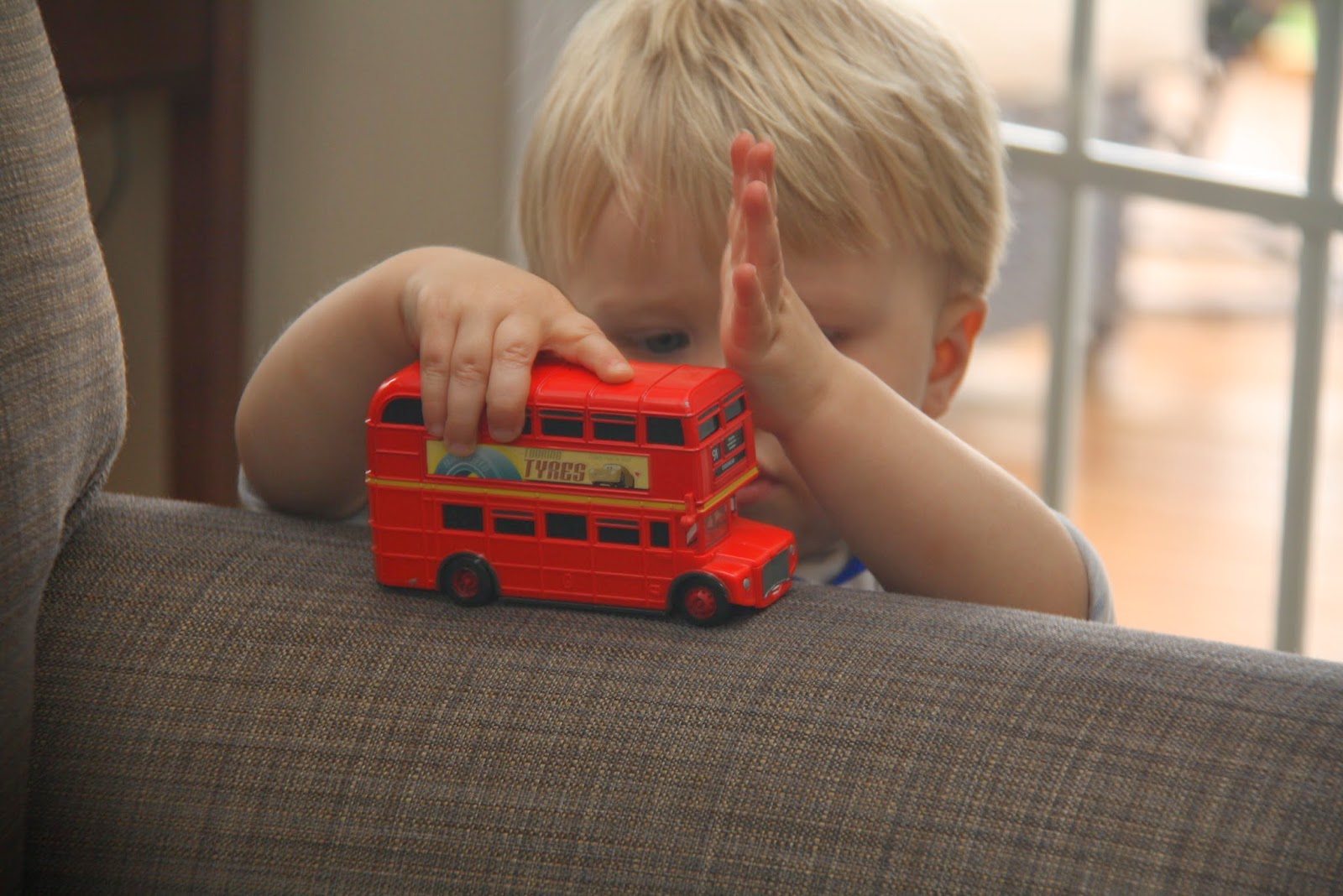 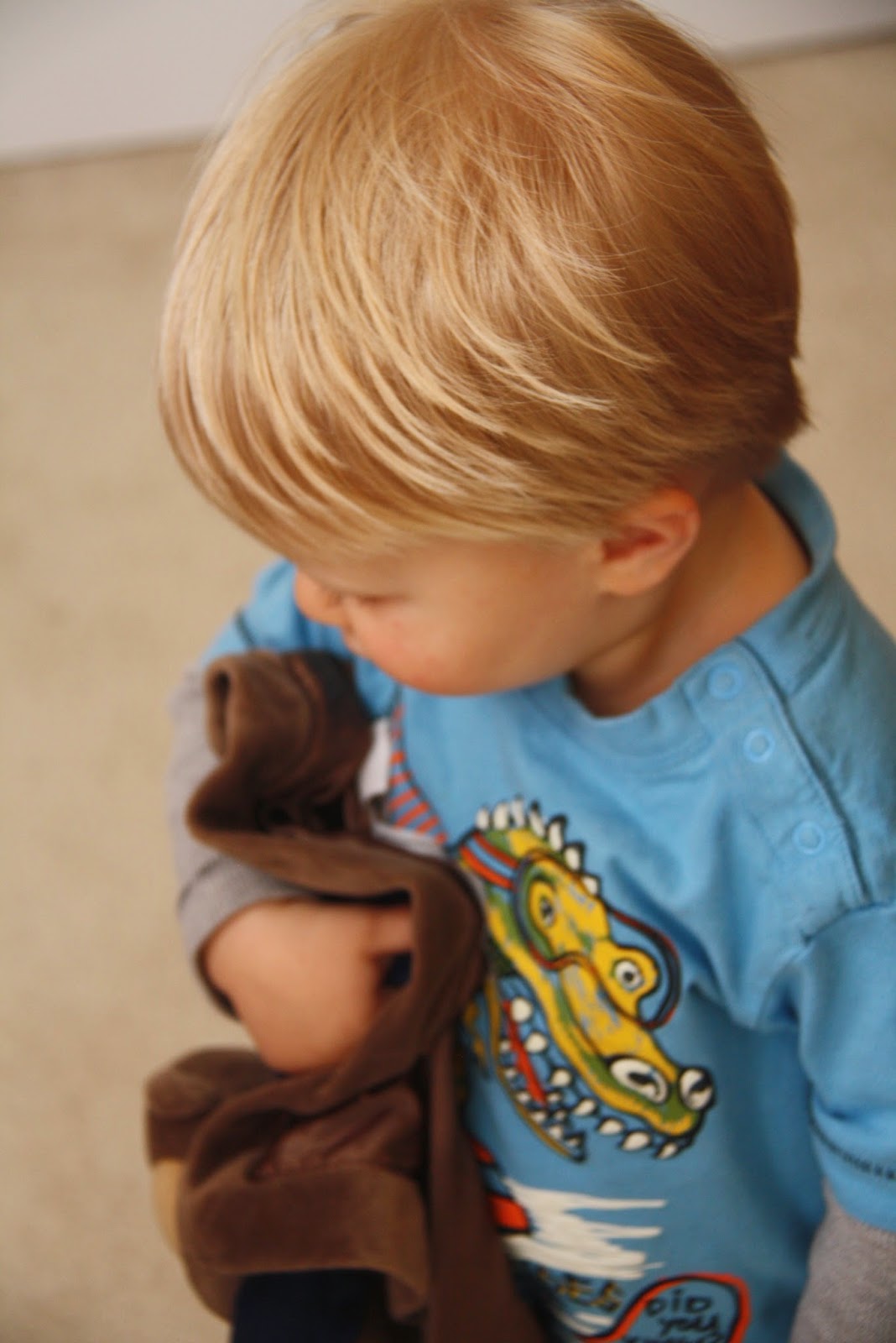