The One That Got Away

Doesn’t everyone have this story? The story about the one that got away? The one that you’ll always wonder what if… ? The person who, if you had ended up with, your life would be a totally different story from what it is now. The game changer.

When I was 20, I met a guy and we started dating. Two months after we had begun our relationship, I can remember sitting on my front porch, talking on the phone with my mom and telling her that I had met the guy I thought I could marry. I asked her if that was crazy – I was only 20, after all. My mom, who had met my dad when she was 20 and married him a few years later, assured me that it was not at all crazy and I should expect an engagement ring in a few months.

Okay, she didn’t exactly say that last part… but I may have extrapolated it from the conversation.

I fell hard for this guy. We were a good match on so many levels, and I was certain that we would be together for a long time. One warm April day, 8 months after we had started dating, he broke up with me. I was heartbroken. I hadn’t seen it coming, and in fact, I think I even tried to talk him out of it.

I spent the summer in Durham, working at internship and channeling my sadness and heartbreak and anger at him into the training I was doing for a triathlon. At the time, I was furious that he ended it so definitively (no "on a break" here). But later, after the sadness subsided, I was thankful for how clean our break-up was and the lack of any bitterness or head games that I would see be the calling card of many of my friends’ long-suffering break-ups.

Life went on. I went to Spain. He immersed himself in preparing for post-graduate work. We both moved on, fell in love with other people, had life experiences that shaped and molded us into new people.

One night in the middle of Spring semester, I walked in the door from a fun night with girlfriends out at our usual location, Burke St. We spilled back into our apartment, giggling and rehashing the night. I walked into my room, and out of habit, checked my away messages.

“ANNA! Anna! Anna, get in here!” I screamed to my roommate.

“Guess who just IMed me?” I pointed excitedly to the screen.

She looked closely. “No way. When was the last time you talked to him?”

I shrugged my shoulders. Since my return from abroad, we had only run into each once on our tiny campus and it had been pleasant but uneventful. A chance encounter of two acquaintances. Other than that, we hadn’t talked into two years.

I read the IM again. “I saw you at the bar tonight. You looked cute. Thought you should know!” The message ended with the big dorky AOL smiley face. I went to sleep with that ear-to-ear grin on my face. It had been a hard year, and the surprise IM was a bright spot in a stressful spring semester.

Fortunately, the story doesn't end there. The message left to more conversations over instant messenger, tenuous and guarded at first, then quickly progressing to the rapport we had struck up so easily years before. The semester ended, graduation day came and went, and I was in U-haul van headed for NY. Our IM conversations turned to hour long phone calls which, over the course of the next year, led to visits which led to “will you be my girlfriend?” which led to moving to NC which led, finally, gratefully, and wonderfully to “Will you be my wife?”

And suddenly, the one that got away was the one who found me again after all these years. The one that changed it all? The one I would have always wondered how it would have turned out?

Was the one I ended up after all. Lucky me. 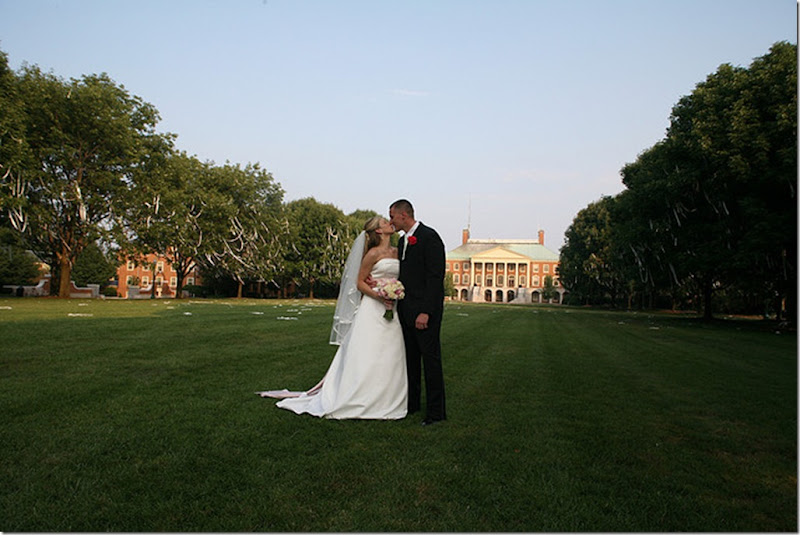 Happy Three Years, Husband. I adore you. Here’s to changing the game.

That's the sweetest story ever. Congratulations on three years.

I love this! It gave me goosebumps :)

What? No pictures of Buddy in this post? That's CRAZY. Seriously, congrats, sweetie. Your husband got the girl and the marriage of the century. At least I think so! And I'm glad you're pretty happy with him, too. And because there is three years of you and Matt, there's BUDDY!!! (sorry, couldn't resist)