Another Saturday Night, And I Ain’t Got Nobody

Matt was working last night, so I downloaded the movie Valentine's Day to watch while I folded laundry and cleaned. I thought that it would be a nice way to “treat” myself, considering my lame-o Saturday night plans. (Don’t take that as a complaint; what makes me a perfect match for an emergency medicine resident is that one weekend night out, one weekend night in is my idea of perfect balance.) Anyways... I digress. The movie? Have any of you seen it? Other than it having lots of my favorite actors in it, the plot/stories were really weak. Like a watered down Love Actually. The only part where I truly laughed out loud was at the end there's an outtake of Julia Roberts in a car, and the driver says to her as they pass by, "Rodeo Dr? You ever shopped there?" and she goes "Once. Big Mistake. Big. Huge."

Oh Julia. You are a keeper. (Anyone else psyched about her playing Liz Gilbert in upcoming "Eat, Pray, Love" movie?)

Friday night, we attended end of the year party at our friend Anne and Locke’s house. End of the year for both teacher-Anne and the first year interns. To the rest of us suckers, summer doesn’t mean anything except relief from the heat in the office air conditioner. I brought my camera, but somewhere between mainlining artichoke dip and bringing back my old school flip cup skills, I forgot to bring it out. Jamie was walking around with hers, so I'll just send you on over to her post. (Eventually, we're just going to come up with a schedule as to who is in charge of documenting and blogging our mutual events.)

Once I had my house all spiffy and my laundry all folded, it was crafty time up in the Cline house. (Seriously, guys, I am just OUT OF CONTROL and wild.) I saw this post and decided to try my hand at it. So I spent the wee hours of Saturday night cutting up an old tee-shirt and glue-glunning. (Haven’t sewn to a shirt yet; will post pictures when it’s complete.) To say my husband was shocked when he called at the end of his shift (midnight) and I was still up is an understatement. It was a fortunate surprise though, as we had nothing as far as good eats in the house, so I put away my glue gun and whipped up some late-night quesadillas for the good doc. See what I mean? Best EM wife ever.

From flip cup Friday night to crafting with my snoring doggy Saturday night. That, my friends, is balance.

Oh, and footnote… speaking of crafts: I know I posted this on Facebook, but I don’t think I posted it here yet. This was my other project from our sewing night. Anne had brought this cute swirly orange and white fabric. I cut shapes out from it, and just free-handed them on with the sewing machine on to a T-shirt that had been in my goodwill pile. I was really happy with how it turned out. Pardon the dorky self-timer pics. 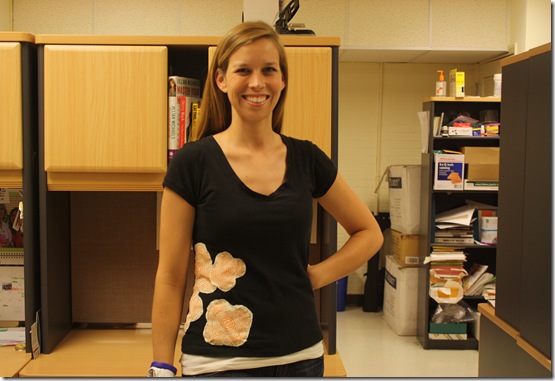 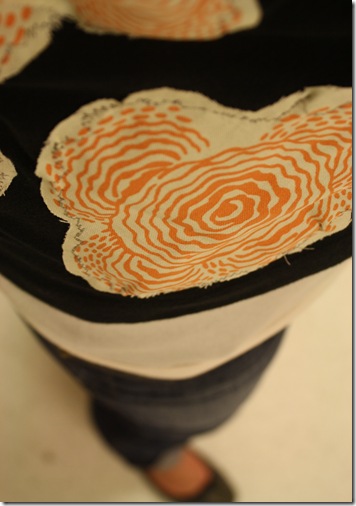 Labels: for the love of craft, homemaking, residency, weekend udpate

That t-shirt is darling! I wish I was a bit more crafty... and knew how to sew! Totally cute.

Just wanted to agree that I love Julia. Can't wait for august!!!

Ok, the blog post with the pics is 98% complete. Just need to tweak a few photos since my hand wasn't too steady. Hang in there and your link will actually be accurate. But I do like the idea of a schedule, or at least assigning one of us to do the writing - I vote you :)

Problem is, I get home from events and find that the only thing I took pictures of was the food! So you take the pictures of people, I'll get the food and together we'll cover everything we do togeth these next few years. Deal?